Washington led the nation in job creation in 2015, primarily by adding jobs in the construction industry.Seattle Times

Starting in 2002, the HVAC industry in Washington had to adapt to new rules requiring anyone working on HVAC systems to hold a valid electrician’s license issued through the Washington State Department of Labor and Industries (L&I).

The state created two new specialty electrician license categories specifically for HVAC technicians, known by the codes they are given in the state regulations as part of series 6, low-energy systems:

Through some particularly complex systems may require a full-fledged general electrician, most HVAC installations and service can be performed entirely by HVAC specialty electricians under one of these licenses.

Like other types of electricians, you will have to go through a number of steps to gain a Series 6 HVAC/R Specialty Electrical License.

Step One - Join an HVAC Trade School or Apprenticeship Program
Trade Schools and Technical Colleges – There are no shortage of HVAC trade school and community college programs in Washington that offer HVAC certificate and Associate of Applied Science degree programs that provide hands-on training and classroom based instruction that will prepare you to:

By attending a trade school program before entering the field, you would be eligible to receive credit for up to one year (2,000 hours) towards the two years (4,000 hours) required to earn your Series 6A HVAC/R Specialty Electrical License, in addition to satisfying all 48 hours of classroom instruction.

Some regional schools near cities that have their own license requirements also provide qualifying training for those licenses.

Apprenticeships – Apprenticeships are available through cooperative training programs sponsored by either union or non-union organizations. They combine classroom learning with practical, on-the-job training under the supervision of a qualified journeyman HVAC technician that is designed to satisfy the job experience and classroom hour requirements for the Series 6 HVAC/R Specialty Electrical License.

You can apply for open apprenticeship opportunities and may be accepted based on your qualifications and the availability of apprentice positions in your area.

There is a $37.90 fee for the application and you will have to meet current construction site age requirements (usually 16 years of age, but may vary depending on the project—you will have to contact the state Employment Standards Office for more information as it applies to your specific apprenticeship position).

Step Three - Accumulate Practical Experience and Class Hours
Whether you attend a technical school program or participate in an apprenticeship, you will have to accumulate a certain number of documented supervised field experience hours under a licensed master or journeyman electrician to qualify for your HVAC/R license:

Completing a technical school program would cover all classroom instruction hours and can substitute for up 2,000 work hours. If you go the technical school route, you will accumulate your remaining practical experience hours through entry-level employment. Many HVAC shops are open to hiring trainees with the expectation that you will continue to work there as a full-fledged technician after you obtain your license.

In an apprenticeship program, classroom and work hours will be carefully allocated to ensure you meet the necessary qualifications for your license.

For both licensing categories, it may be possible to apply military experience or experience gained out-of-state.

Step Four - Apply for Journeyman Specialty Electrician License and Pass a Licensing Test; then Consider Earning a Master-Level License
Once you have fulfilled the experience and training requirements, you are eligible to submit your application to L&I (together with a $90 license fee) to become a journeyman electrician and take the licensing exam.

Exams are administered by third-party testing company PSI. Once your application is approved, you will receive contact information for scheduling your examination.

Once you pass the exam and have your journeyman’s license, you will no longer require direct supervision to work on HVAC systems.

After two years of experience as a journeyman, you will be eligible to take the exam for the Master Electrician Specialty Certificate in your category.

Step Five – Keep the License Current
Your license will expire after three years, at which time you must renew. Renewals can be made online for $72.70 or in person or by mail for $83.50.

You will also have to provide documentation certifying that you have undergone at least 24 hours of continuing education in the current 3-year license period. Eight of those hours must deal with code updates and another four are required to be refreshers on state license laws, but the remainder can be made up of any combination of courses from L&I’s approved course list.

Although the state only requires an electrician license, some Washington cities have additional licensing requirements for HVAC technicians depending on the type of HVAC installation being serviced, each with their own set of requirements:

As an example, the City of Seattle offers three types of refrigeration licenses, a gas piping mechanic license, and a steam engineer and boiler fireman license that you may need depending on what type of HVAC systems you are working with.

Each of the refrigeration licenses and the gas piping mechanic’s license requires passing a test and either undergoing an apprenticeship process or providing proof of training at a recognized trade or technical school covering HVAC technology. Boiler licenses only require passing Seattle’s city-administered test.

Each of the other cities has their own set of requirements that you can find more general information about here.

Many HVAC technicians will not need to worry about these licenses because the technology in the field has evolved away from the types of systems these licenses cover. In fact, the city of Tacoma scrapped its own licensing program for boiler technicians in 2000.

Although the state licensing process focuses on electrical requirements, those are only a small part of the work of HVAC systems installation. An EPA certification package is often included as part of the curriculum in HVAC/R trade school or community college programs.

Section 608 of the Federal Clean Air Act covers the uses of regulated refrigerant substances. There are four categories of certification:

Type II covers most standard residential and commercial systems, making it the most common certification among HVAC technicians and contractors.

You will need one of these certifications to work directly with equipment using controlled refrigerants. Some HVAC positions do not involve these tasks but you will find your job opportunities limited if you do not hold an EPA certificate.

How to Become an HVAC Contractor in Washington

Although working as an HVAC technician can be lucrative, most ambitious installers someday hope to run their own HVAC businesses. If you have a good head for business, an ability to plan and supervise system installations, and a flair for salesmanship, you will likely make the decision to eventually work towards earning your HVAC/R specialty contractor’s license. 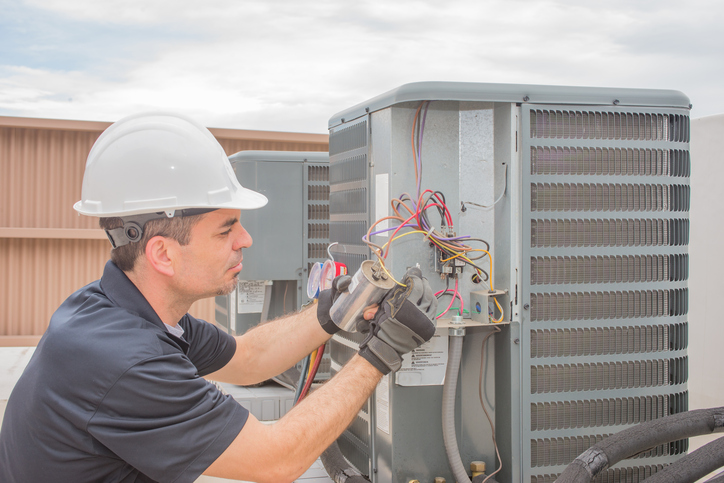 HVAC technician working on a capacitor part for condensing unit.

Because of the way the licensing process works in Washington, it makes most sense to take this step only after becoming a master specialty electrician in your license category. Washington does not require that HVAC contractors pass a test, unlike some other states, but instead requires that every licensed HVAC company designate a qualified master electrician on staff to be responsible for maintaining standards to code and supervising other employees.

You can always hire someone else to fill this position but it’s more economical and provides more control to assume that role yourself.

The primary benefit to becoming a specialty contractor is that it requires only a $6,000 bond be posted, versus the $12,000 required of general contractors. Obtaining an electrical contractor’s license through the Washington State Department of L&I involves the following steps:

Your contractor license must be renewed every two years, for a $240.10 fee. You can renew online here.

One look at the Seattle skyline these days tells you all you need to know about job prospects in the trades: it’s a good time to be working in construction in Washington state. A forest of cranes, the sound of heavy equipment, and open construction sites means there is plenty of work to go around for HVAC technicians today.

All that construction has been powering massive job growth. According to the Seattle Times, Washington led the nation in job creation in 2015, primarily by adding jobs in the construction industry. In fact, according to the Washington State Economic and Revenue Forecast Council, the share of construction-related jobs as a percentage of the total outstrips the national average by almost a full percentage point. For certified HVAC technicians, this means increasing demand and increasing salaries.

Numbers from the State Occupational Projections project bear this out. Over the next decade, the state is expected to add around 1,000 new HVAC positions, an increase of 22 percent. HVAC technicians will be working on all that new construction, but, just as importantly, they will be servicing the many new HVAC installations in homes, apartments, and commercial buildings that are springing up around the region.

Gone are the days when HVAC service meant dropping in an oil-fired boiler and running some clanking pipes around the building; today’s HVAC systems are heavily computerized, interlinked with building management systems, and built to specific tolerances to ensure high efficiency.

For Washington HVAC technicians, earning a diploma, certificate, or associate’s degree from a qualified HVAC/R program can serve as the best first step to a long career in an exciting and growing industry.

In the majority of Washington’s major metro areas—Tacoma, Seattle, Kennewick, Aberdeen, Bremerton, Mount Vernon, Vancouver, Port Angeles, Bellingham, Olympia, Clarkston, Quincy, and Yakima—the recorded salaries for HVAC technicians are higher than the national average. But great wages aren’t the only thing that sets a career in HVAC in Washington apart from the rest of the country.

Construction is among the top five fastest-growing industries in the state, adding 11,800 jobs from December 2013 to December 2014 alone.

In Washington, the job market for HVAC technicians alone is expected to grow by 22.1% during the ten-year period leading up to 2024. This is expected to add an estimated 1,090 new jobs during this time frame, representing an average of 190 new jobs each year (Washington State Employment Security Department).

We’ve collected salary and wage data on sixteen of Washington’s most populous cities from the US Department of Labor’s 2015 report. The ranges shown here represent the median to top 10% earnings for HVAC techs in Washington’s largest metro areas.