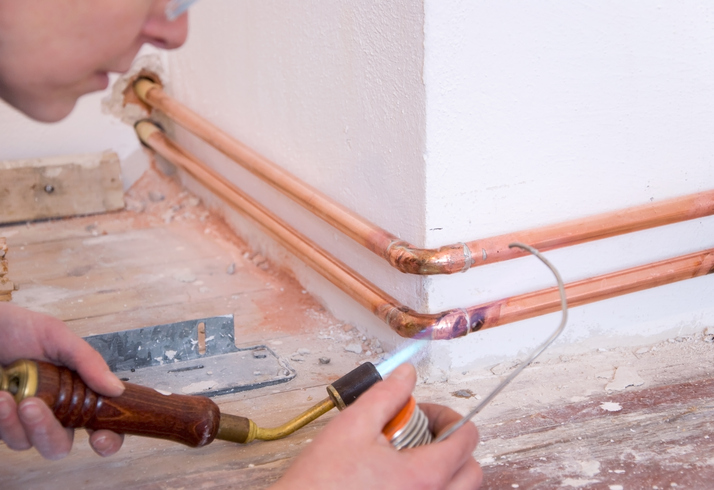 Pipefitters – or steamfitters and gasfitters, as they are sometimes called when working with the specialized systems those names indicate –fabricate, install, and service piping systems for everything from housing developments to commercial and industrial projects. Although these kinds of piping networks are commonly used for HVAC systems, pipefitters aren’t restricted to just one sort of application—they work on any type of system that needs strong, stable, leak-proof pipe connections.

In the HVAC world, pipefitters are responsible for putting together much of the infrastructure that handles the feeding and distribution of big industrial and commercial HVAC units. Water and gas supply lines have to be laid in to the units, with steam or hot water (in the case of hydronic systems) is then carried out.

Some systems use even more exotic fluids and gases, such as ammonia or propane, and those, of course, rely on secure, leak-proof piping too.

No matter what it is, if it can flow, pipefitters have probably built a system to handle it at some point.

Pipefitting involves a lot of different ways of putting pipe together. Fitters may have to cut threads on custom installations so pipes can be joined together, but they also have to become experts at several other joining and fitting methods:

Some of these methods, although ancient, require a high degree of skill that can’t be—and usually is not—taught in any classroom. Only training and practice under the watchful eyes of master tradesmen ensures these skills are carried on at a high standard.

Unlike many HVAC careers, pipefitters generally don’t need to worry at all about customer service. If you’re the type of guy who likes to throw on a welding hood and forget the outside world exists while you’re getting the job done, pipefitting will be a good fit for you. People skills definitely come in second place to a good work ethic and job skills.

Fitters work in all sort of piping materials, including:

Each of these types of material has different ways of being connected and shaped, and one or the other may be best for different applications. Pipefitters have to know all about those materials, their benefits and drawbacks, and often something about what is running through them, whether it’s raw sewage or explosive propane gas.

The work happens both on job sites and in fabrication shops.

Shop Work as a Pipefitter
Generally, work done in the shop requires specialized tools and room to work. Shop fitters tend to do a lot of welding and fabrication work, building custom fittings for jobs their company is taking on, or sometimes just directly for customer orders.

Because of the curves and sometimes-unusual materials pipe can be made out of, pipefitting welders are among the elite of the trade. Laying down a solid weld is crucial to the integrity of pipes. Master welders use processes like:

They deal with special electrodes and gases used in those processes, and listening to them talk about their techniques, you might think you were in a science lab rather than a welding shop.

On-site Work as a Pipefitter
Pipe installation is heavy, physical work. Pipes aren’t light, and they aren’t installed in places that are easy to get to. Pipefitters often work in new construction, which alleviates some of the difficulty of access, but introduces the difficulty of working in dangerous, open job sites where they are exposed to the weather.

Site safety ranks high in pipefitter responsibilities. They may be expected to work with heavy equipment or coordinate with equipment operators to bring in tools and supplies or position pipe until it can be secured in place.

They may have to cut and thread pipe on the fly to meet the demand of job site irregularities. They are always expected to make solid connections and check the seal of the systems they build before turning them over to the eventual owners or other technicians.

Specialty Pipefitting
The high standards for the profession rise to their highest level when dealing with critical systems and substances, like those found on ships or submarines where a bad weld can sink the whole thing. This means a specialized and highly elite subset of fitters work exclusively in the nuclear industry, carrying special training and certification for working in critical radioactive water and steam systems.

Preparing for a Career as a Pipefitter

Math and geometry skills are must-haves for pipefitters. Visualizing how pipes will be routed through a space and calculating how to cut and join sections takes a mind that is quick with numbers. Also important is the ability to make calculations regarding drop and rise in a system.

Although it is up to other HVAC technicians to calculate pressure and rate requirements in heating and cooling systems, they depend on pipefitters to install pipe that will effectively carry the contents around the building. The angle over distance can be crucial, and involves math for it be calculated accurately.

Picking up the ability to read blueprints and construction plans can also be important.

Many HVAC trade school and community college programs cover these skills, but usually not to the degree that is necessary to get a job in the field.

This makes it a lot more common for guys to take the apprenticeship route into the trade. UA (United Association), the pipefitters/steamfitters/gasfitters union, offers programs that typically run to around five years in length and offer a combination of classroom work and on-the-job training to both teach the right skills and ensure that apprentices develop a practical understanding of how to use them.

These apprenticeships involve working under the supervision of expert journeymen or master craftsmen on real jobs, where the apprentice works progressively to master more and more advanced skills and responsibilities until the apprentice is rated a journeyman.

The National Center for Construction Education and Research (NCCER) offers a credential called the Certified Plus that is becoming a popular qualification for pipefitters. The certificate can be earned simply by passing a written exam on:

Some pipefitters can work without licensing, but in many states, if you are going to be working on piping carrying live steam, explosive gases, or other high-pressure materials, you will likely have to get a state or municipal license.

In most cases, the requirements for this license will be met by completing an apprenticeship program. In some cases, other education can be substituted for the work hours that may be required. In New Hampshire, for example, a NATE (North American Technical Excellence) or CETP (Certified Employee Training Program) certificate are required to become licensed as a gas fitter.

There are also speciality certifications for certain categories of pipefitter, such as the UA Nuclear Mechanic program for fitters working on nuclear power systems.