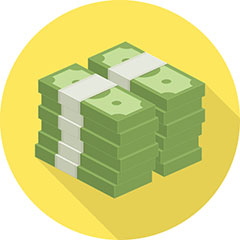 It’s not a bad idea to think about your earning potential from the perspective of a business owner. Who knows, you might even open up a shop of your own and be signing some other guy’s paycheck one day. From the perspective of a business, everything is an expense – even you. And every expense is factored into the cost of a job. As far as the business is concerned, your sweat and brainpower is quantified as an hourly rate.

Material costs for things like copper piping and aluminum or galvanized steel for ductwork can be influenced by global metal prices, but for the most part the rate you’re paid is only subject to local market forces. In some cases, the wage union leaders are able to negotiate has some influence, but even then the local job market has a lot to do with the prevailing wage paid in a given area.

In other words, one of the biggest things to influence what you’re going to be paid is the going rate for HVAC service techs and installers is the state you’re working in.

The good news is that right now demand is high for skilled HVAC tradesmen, and everybody knows demand is a corollary that is inseparable from cost. The simple fact that there are not enough guys out there that know the HVAC trade means that contracting companies and business owners are paying a premium for the knowledge and skill needed to get jobs done.

Here’s how wages and salaries compare in different parts of the country (US Department of Labor, 2016):

Difference in Pay Between Service Techs and Commercial Mechanics and Installers

These types of businesses work with small-scale residences or commercial outlets to do things like system upgrades, maintenance, or repairs. They may even do some residential installs, but in larger housing developments those jobs usually go to major contracting companies. Jobs with these kinds of shops are generally easier to land, require less experience and specialized skills, and are less seasonally dependent which means that work is sometimes steadier.

But chances are you’ll reach the senior level sooner, which means your salary could level off earlier and potentially at a lower rate than for guys who work with major commercial contracting companies.

These types of businesses bid for HVAC contracts that can be valued in the millions. Union companies often have the skilled labor force necessary to take these jobs, so they are almost always among those that bid these contracts. This means prevailing wage often applies to these kinds of jobs. Getting hired on with one of these outfits means you’ll work on larger-scale construction and upgrade projects that can include everything from multi-family apartment blocks to commercial skyscrapers. You’ll have more of a chance to become specialized in a specific area of HVAC, and over the long-term earn a higher salary.

However, HVAC jobs on this side of the industry are more dependent on seasonal construction work, and contracting companies are generally less likely to hire inexperienced HVAC techs fresh out of school.

A Comparison of Annual Salaries

You can get a sense of when and how salaries reach a ceiling by comparing the national statistics for retail HVAC repair and maintenance companies versus what major commercial/industrial contracting companies pay (statistics from the US Department of Labor, 2016):

You can see that top salaries for techs in the commercial contracting side of the industry are between $2,590 and $8,150 more every year (that’s between $1.29 and $4.05 more per hour) than what guys working for residential and light commercial service shops earn.

Because retail HVAC businesses focus on more general repairs and maintenance, of course they’re overall expenses are much, much lower than for larger contracting companies. For these businesses, manpower is always the biggest expense and virtually the one they think about. Labor costs can be the biggest line item on the bid price for large-scale jobs too, but proportionally, labor is a smaller expense in the world of commercial contracting than it is for smaller service shops.

With the number one expense being the hourly wage of the HVAC techs on payroll, and with companies doing everything they can to control costs, there tends to be a lower benchmark for the more skilled guys on the upper end of the pay spectrum. This is a big reason why it’s not uncommon for guys to enter the trade on the residential/light commercial service side of the industry, gain experience, and then jump ship to join a bigger outfit later on.

Your Pay is a Factor, Not a Variable

When it comes to determining profits for shop owners on the residential/commercial side of the industry and contractors on the commercial/industrial side of the business, the calculations become much more complicated. There is a lot more that goes into determining profits than go into determining salaries and wages for employees, though the basic formula is a matter of simple subtraction. Of course, what an individual contractor or contracting company takes home is simply the difference between the price that was accepted during the bidding process and the total of all expenses associated with the job. The same is true for smaller shops on the residential service side of the industry, but on a smaller scale.

The good news for you is that business owners and contracting companies don’t have a lot of wiggle room when it comes to what they can pay their employees. Labor competition effectively determines how low business owners and contractors can go. They just can’t pay anything less than what their employees could make with another company, so it’s generally understood that there is a non-negotiable minimum associated with payroll as an expense.

So although your pay is a significant factor in the cost of running a business, it isn’t a variable since contractors can’t simply decide to pay you less so they can make more.

“Basically for HVAC estimating you just count up all the duct work, pipe fittings, equipment, labor, crane use – all those factors that are involved in completely installing the HVAC system so you don’t miss anything in your bid because everything is attached to dollars.”

“To make a good estimate we would look at other bids we’ve done for other projects and we would incorporate those into ours; bids for equipment, suppliers, rooftop units, VAV boxes, pumps, air inline units, exhaust fans, supply grills – things like that. We would get numbers from those previous bids and add them to our bid. We’d also get an insulator price, a balancer price, and a controls price. So for an actual HVAC bid you’re looking at four or five or six other prices to put into your bid as well.”

“Everything would come together on a single Excel spread sheet where we would apply our profit and overhead at the end. Also tax if you have it, permits if needed – usually always – and we’d come to a final number. Normally we’d discuss it with a team and see if we all agree on that number, and make sure it sounds good for that project. Once we agreed we’d send it to the general contractors.”

Get What You’re Worth

Since we’re talking about money here, let’s crunch some numbers… Let’s say you work full-time for 30-years with weekends off and two weeks of vacation a year. We’re making a conservative estimate here. Since we don’t want to pad the number and give an artificially inflated figure, we’re just going to call it a 40-hour workweek with no overtime…

From that perspective you can see that every dollar counts. If you earned just $2-an-hour more over your career, that would mean you’d have an extra $120,600 in your pocket by the time you retire. That’s like saying you could have a house as your retirement bonus. And if you stick some of that into an IRA … well let’s just say it could be a lot more. We’re not in the business of providing financial projections; we just want to give you an honest look at what your sweat and smarts could be worth.

Just because there is an established minimum for your pay doesn’t mean you don’t have the right to negotiate your salary higher.

On the commercial side of the industry where unions often dominate in many parts of the country, your union representatives handle the negotiations for you. Part of your union dues go to paying the salaries for the reps that stick their neck out to make sure you’re getting every last dime you’re worth. That’s literally your money working for you. And if industry lobbyists want to go to work to keep labor costs down, well they’re in for a lot of political wrangling and backroom deals to try and make it happen.

If you work on the residential/light commercial service side of the industry, then it’s up to you to go to bat for yourself if you think you’re worth more than what you’re getting. Some employers are more receptive to negotiation than others, but any decent business owner knows the value of a good employee and isn’t going to let a good guy walk out the door over a dollar or two an hour. Next time you’re working up the courage to walk into your boss’s office to talk about a raise, arm yourself with the confidence that comes with knowing that a smart and capable technician does a lot for the bottom line.