In Virginia, HVAC-R technicians are licensed tradesmen, classified with the other specialized trades alongside electricians, elevator mechanics, and gas fitters. Consequently, the licensing structure closely resembles the traditional system that has long governed those other trades: HVAC tradesmen must initially work towards a journeyman’s license in order to work independently and may eventually qualify to move up to a master’s license in the trade.
Sponsored Listings
Featured Programs:
Sponsored School(s)

The Department of Professional and Occupational Regulation (DPOR) handles the licensing process in Virginia. The basic requirement for licensure involves:

There are several different paths to fulfilling the experience and education requirements necessary before being allowed to sit for the test.

According to the Virginia Workforce Connection, HVAC job growth in Virginia is expected to top 13 percent over the next decade, so it’s an excellent time to get in on the ground floor of the trade.

How to Become an HVAC Technician in Virginia: Licensing Requirements and EPA Certification 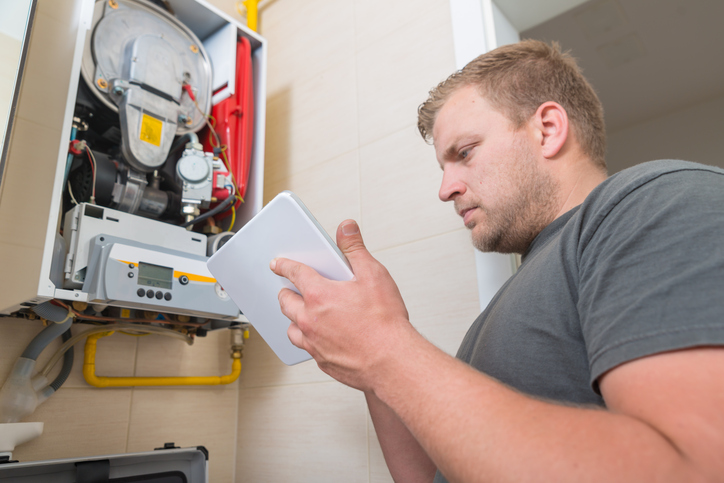 To gain the formal classroom training and on-the-job experience required to sit for the Virginia HVAC tradesman exam, most people follow one of two routes:

A trade school or college degree program in HVAC may be the best choice to acquiring the necessary training to qualify for the HVAC exam. Modern HVAC systems are complex, computerized, interconnected structures, and a high degree of technical skill is required to successfully plan, install, and manage them. A scientific degree or certificate program will cover all the bases on the latest technology and prepare you to hit the ground running when you acquire your license.

Another advantage to most formal training programs is that they specifically prepare you for taking the EPA Section 608 certification test. Named after the section of the Clean Air Act that requires it, the 608 certification is required for any HVAC-R technician working with certain controlled types of refrigerant gases, particularly freon-based and ammonia-based. Since these are exactly the types of refrigerants present in most commercial and residential systems, gaining this certification is a must for almost all HVAC technicians.

To fulfill the experience requirements, you will have to find a position with an employer willing to offer you a position where you can practice under supervision until you have met the experience requirements. Some colleges have placement programs to assist you in finding such positions. In many cases, they are long-term employment offers, where you are expected to continue working with the same company as a fully licensed technician once you have passed the journeyman test.

Apprenticeships in Virginia are primarily offered by individual employers, although a handful of union-based apprentice programs are available. Entering an apprenticeship directly with an employer is no different than getting hired for any other job—you will have to find an opportunity, interview, and accept the terms of any offer the employer makes.

The primary difference is that you may be earning slightly lower wages with the understanding that the employer will undertake the task of training and supervising you through the course of the program, and will document your work and training hours for the purpose of qualifying for the state HVAC journeyman test.

Because there are so many different employers offering apprenticeship opportunities, the state has created a website that allows you to search by profession and location to see what companies are hiring apprentices in your area.

Since you also need to satisfy the classroom training requirements, employer apprenticeship programs will include stints at local community colleges or private training programs offering HVAC classes. In fact, they may be at some of the same colleges and trade schools that also offer full degree programs in the subject, although you will not attend the full range of classes or receive the same credential as students pursuing that route. The training must be offered by a provider on the DPOR list of approved vocational training providers.

You will need to file your license application with DPOR prior to taking the tradesman exam. You can find the application on the website here, together with the required forms for documenting your experience and education. A $130 application fee is also due at time of filing.

Once your application has been approved, the state’s designated testing provider, PSI, will be notified of your eligibility to sit for the test and will contact you to schedule the exam. There will be an additional $100 exam fee due, payable to PSI.

The test itself has 85 questions and must be completed in 210 minutes or less. A 60 percent or better score is required to pass.

Reciprocal Licensing as an HVAC Tradesman in Virginia

Virginia as a reciprocity agreement for HVAC licensing with only one other state, Maryland. If you have a current HVAC license in good standing in Maryland, you can make your Virginia application immediately, still paying the license fee, but your Maryland license will satisfy the training and experience requirements.

Your license will expire two years from the date of issue. You’ll need to renew it, for a $90 fee, with DOPR, following the renewal instructions they will send you approximately two months before the expiration date. If you fail to renew within 30 days of expiration, you will have to pay a $140 reinstatement fee, but you are not required to reapply for the license unless more than two years pass without renewal.

During each licensing period, you are required to attend at least three hours of continuing education classes from a recognized provider.

How to Become an HVAC Contractor in Virginia

The natural progression of your career as an HVAC technician will probably lead you toward gaining your master’s license after several years of experience as a licensed journeyman. You are eligible to take the master’s license exam after one year as a journeyman, but most people wait five years or more to accumulate additional on-the-job experience.

With a master’s license and at least two years of experience, however, you will be eligible to become a licensed contractor, running your own HVAC business. With some sales and management skills, contracting is a lucrative way to advance your career.

The class you choose may largely depend on the type of installations you plan to service. A small shop focusing on residential HVAC may easily fit into the constraints of a Class C license. A large commercial installer is more likely to require a Class A.

The respective tests for each class reflect the increased responsibilities, with Class A tests having a broader scope of questions and knowledge required than Class B, and Class B more than Class C.

For each of the three classes, a mandatory 8-hour pre-education course must be taken from a recognized provider.

You will also have to select your contractor specialization at time of filing. Again, smaller contractors are likely to have only an HVA (for HVAC) designation, but larger contractors might have more than one.

The person who meets the experience requirements for the company is called the Qualified Individual, and in Class C companies this is also the person who will take the required tests. But t is possible to start a contractor business (or to get more than one specialty designation) by selecting another person who meets the experience requirements. This person must be a full-time employee with a minimum of 30 hours on the job each week, or part of the company’s management team.

For Class A and B licenses, there is also a Designated Employee, who need not be the same as the qualified individual, who can take the tests and pre-education course on the company’s behalf. For Class C licenses, the same person has to fill both roles.

Arlington, Harrisonburg, and Richmond were all recorded as having salaries that were higher than the national median or 10% salary for HVAC technicians.

While Virginia’s economy “slowed somewhat” through the latter half of 2016 and many industries lost jobs, the construction industry held stable (Federal Reserve Bank Virginia Snapshot, January 2017).

The Virginia Workforce Commission’s Labor Market Information reported that as of 2017, the construction industry had 1,410 job openings, with the most openings located in Fairfax Country.

According to the Virginia Workforce Connection, the HVAC job force is expected to grow by 13.4% over the twelve years spanning 2012-2024. This job growth is projected to add 1,400 jobs, or an average number of 300 jobs per year.

The salary figures recorded below were sourced from the US Department of Labor. We’ve broken the data up into two figures: average annual wages and hourly earnings. The data represents the median to top 10% of earnings in the field. We’ve included data for thirteen of Virginia’s largest cities.