Instead, there are only two qualifications required to take the Type S (for Specialty) HVAC-R electrician license test to become licensed through the Vermont Department of Public Safety Division of Fire Safety. These two qualifications can be satisfied in one of two different ways: 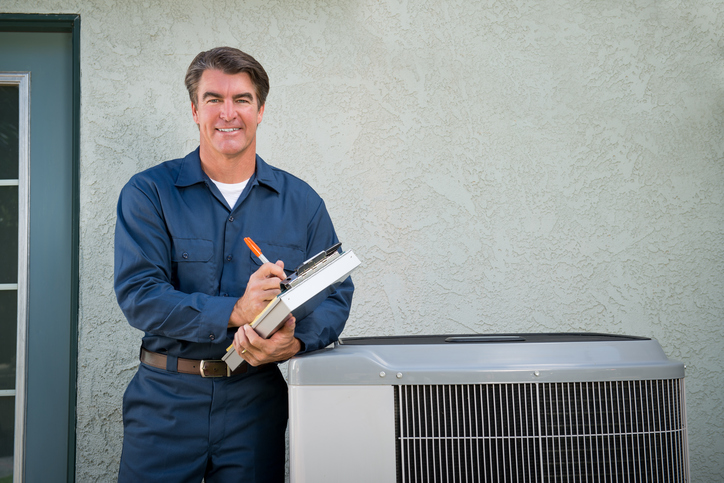 Air conditioner repairman on the job

A solid education in HVAC technology is the best edge job applicants can have. By securing an associate’s degree or career diploma from a reputable HVAC trade school or technical college can you ensure that you have the knowledge and training required to compete for entry-level HVAC technician jobs so as to accumulate the job experience required to earn your specialty license.

And since the state has no contractor licensing requirement in Vermont, becoming an HVAC-R technician is all you need to do in order to form your own business and work for yourself.

How to Become an HVAC Technician in Vermont: Meeting State Licensing Requirements

Some HVAC positions may also require a Type S A1 (Automatic Gas or Oil Heating) credential, but this is less common.

It’s possible to work toward and apply for both specialty licenses simultaneously.

Once you have met the education and experience qualifications, you can submit your application form to the Department of Public Safety Division of Fire Safety (DFS). You will need affidavits from your employers attesting to the fact that you completed the experience requirements and proof of completing a recognized training program if you have opted to go that route.

DFS does not publish a list of recognized programs, so you must check with the school you plan to attend to ensure that they are approved by the state.

The cost of the application will be $115 for each specialty license you are applying for; for example, if you’re trying for both a C3 and A1 license, you’ll have to pay $230 at time of filing.

Once the application has been approved, you are eligible to take the examination. You have the choice of either taking the test online or at a regional exam center. The tests are administered by third-party companies; click on the links below to register.

The test modules consist of 35 questions each and you must pass with a 70 percent score or better.

Retakes are allowed up to three times, with a minimum 10-day wait between each, in the event that you fail. You can take a maximum of two tests each day.

Your license will expire after three years, at which time it must be renewed via a form sent out by DFS (which will also specify the renewal fee, which may change from year to year). At the time of renewal, you will have to document completion of at least 8 hours of continuing education by a recognized training program (a list of these is available here) in your specialty field. Fifteen hours are required if you hold more than one specialty license.

It is possible to follow the complete apprenticeship license process to become a fully-fledged journeyman electrician, then accumulate the two years of on-the-job experience necessary to advance to a master electrician’s license so as to be legally permitted to work on HVAC-R systems.

Master electricians are permitted to perform all the same work as specialty electricians. Regular journeyman electrician license-holders cannot perform specialty work unless supervised by a master or specialty license holder of the right category.

With all the emphasis on electrical licensing for Vermont HVAC technicians, it may be easy to lose sight of the fact that federal certification is also required for those working with AC and refrigeration systems that make use of certain common refrigerants known to be damaging to the environment.

Section 608 of the Clean Air Act requires that any HVAC technician working with regulated refrigerants be certified. This involves passing a test on the safe handling and disposal of those chemicals.

There are four types of Section 608 certification:

The fee for each certification is $35. HVAC technical college and trade school programs usually administer the tests. HVAC programs usually specifically prepare students to take and pass a section 608 test, yet another reason to enroll in a formal HVAC training program.

It is possible to take the test online without going through a school, however.

Vermont’s HVAC Market is a Competitive One

Vermont is an affluent state tucked away in a corner of the country that hasn’t experienced either the highs or the lows of the past decade of fluctuations in the housing market. Year over year, Wells Fargo reports that Vermont experienced only a modest 1.6 percent growth rate from 2014 to 2015. But the same report points out that a shrinking labor market has steadily reduced unemployment, making the job market more competitive and driving up salaries.

With average highs that don’t get much above 80 degrees even during the warmest months, the focus for HVAC is definitely on the heating side of the spectrum in the Green Mountain State. But modern climate control systems are complex beasts, and HVAC-R technicians have to be able to demonstrate mastery of advanced building automation systems.

In Burlington, South Burlington, Essex, and Rutland, the recorded salaries were higher than the national median for HVAC technicians.

According to the Vermont Department of Labor, from 2012-2024, the HVAC job market in Vermont is expected to grow by .4%, opening up an average annual number of 10 jobs in the field.

For HVAC technicians interested in working as independent contractors or starting their own HVAC company, Vermont is a great place to get started. According to a 2013 article by CNN Money, Vermont ranks number two on a list of the “10 Most Entrepreneurial States.” The state ranked highly because of its low-cost small business loans and venture capital network.

The salary figures recorded below were sourced from the US Department of Labor. We’ve included the median salaries to the top 10% of earnings for HVAC technicians. The data included represents five of Vermont’s largest cities.