To become an HVAC tech in Texas, you’ll need to register with the Texas Department of Licensing and Regulation in one of two ACR (Air Conditioning and Refrigeration) technician categories:

A career diploma or Associated of Applied Science in HVAC-R from a technical school will typically include an exam package that makes obtaining certification quick and easy. These programs also offer the training and education necessary to prepare graduates to meet entry-level job and apprenticeship requirements, in addition to meeting state registration requirements for the Certified ACR Technician designation.

On the whole, Certified ACR technicians have an easier time finding employment and a brighter career path than techs who are only registered.

Going through a technical school program will also allow you to take advantage of job placement services that schools typically offer.

How to Become an HVAC Technician in Texas: Registration & EPA Certification

You only have to pass one in order to qualify for the Certified ACR Technician designation, however.

The qualifying exams are often offered as a part of HVAC technical school programs. This would involve taking the exam as part of your regular program.

A full list of qualifying schools is available on the FAQ page.

You may not advertise your services as a licensed or certified ACR technician. Only licensed ACR Contractors are allowed to solicit HVAC business.

How to Become an HVAC Contractor in Texas

If you are the kind of person who likes to be your own boss, has a head for business, and can be a salesman as well as a technician, after five or six years working in the field you will probably start thinking about becoming an independent HVAC contractor. 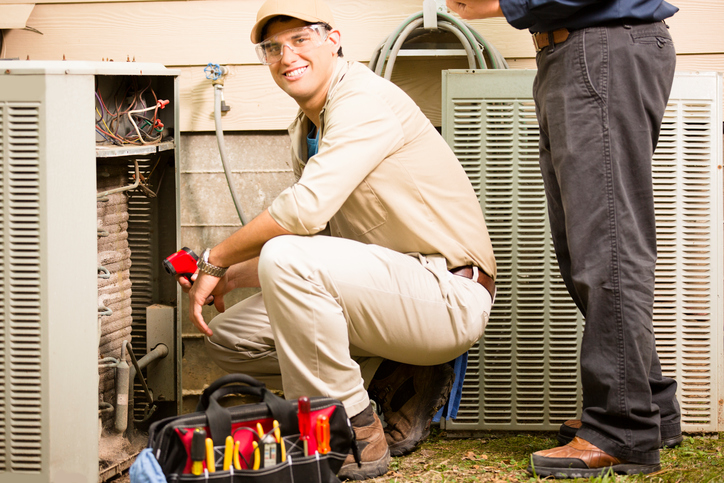 Going out on your own is a big step and the biggest mistake people make at this point is doing it without a big enough bankroll to last through the startup phase. You can make good money running your own shop, but you have to take all the risks that come with business downturns and unforeseen expenses. It’s not for everyone, but if you are independent and level-headed, you are a good candidate to apply for a state HVAC contractor’s license.

It’s possible to become a contractor without ever having worked as an ACR technician, but this is unusual, since gaining practical, on-the-job experience is critical to getting customers and managing projects.

Having a solid educational background as well as experience is vital for contractors. You will be the person in the shop responsible for making all the big decisions. You will need to have the technical knowledge to make them correctly, or you’ll be on the hook when things fall apart.

The biggest choice you will have to make when getting started is between specializing in commercial or residential units.

Each of those classes are further categorized by three different available endorsements:

The commercial endorsement is better thought of as an industrial endorsement, since it doesn’t mean commercial in the same sense that most of the HVAC industry uses the term to describe business and larger-scale installations.

Your background experience will play a large role in which of these classes and categories you will be successful in, so when you are picking where to apply as a technician, look for outfits that work on the same kind of systems you’ll want to become a contractor for.

For any class or combination of endorsements you will have to pass a test administered by PSI Exams. You will not have to contact the exam company. TDLR will inform PSI that your application has been processed and they will contact you in order to set up a date and time for the examination.

You will document your experience and provide other information by submitting a completed Texas ACR Contractor License Application form together with a $115 application fee.

After passing the exam, you will have to submit a certificate of insurance to TDLR in order to complete the licensing process. The amount of coverage varies by license category:

An ACR Contractor license expires after one year. You can renew online 24 hours a day at the TDLR website. The renewal fee is $65, escalating to $97.50 if you renew between 1 and 90 days late, and $130 if renewing more than 90 days late.

You are required to have eight hours of continuing education each year in order to renew your license. At least one hour must cover Texas air conditioning and refrigeration law and regulations. Only courses taken within the license period can be counted for continuing education purposes.

The courses must be taken from an approved provider. A list of providers and courses is available on the TDLR website. The provider will take care of notifying the state that you have fulfilled your requirement by completing their course.

To receive a Texas ACR contractor license if you already hold a license in one of those states, you must:

The exact transference of endorsements and classifications between your out-of-state license and the Texas credential can be found on the TDLR frequently asked questions page.

It is also possible to acquire a Texas ACR contractor license if you hold a comparable license in another state or municipality. These applications are reviewed on a case by case basis by the TDLR. You must submit your application together with a copy of your current license and information about when and where it was obtained.

Heat is a fact of life in Texas, where summer highs average in the upper 90s. In that climate, both homes and offices require air conditioning as a matter of course. And the work goes beyond new installations, since the many existing HVAC systems in the state have to be serviced and maintained.

As of 2005, two-year warranties are mandatory on HVAC systems installed in new construction or remodels.

Since 2011, construction permits and leading indicators have been outpacing the national average. Housing sales increased by 20 percent from 2015 to 2016.

All this has been driving the job market for HVAC technicians just as rapidly.

In Amarillo, the recorded salaries were higher than the national median and top 10% for HVAC technicians.

As Texas’ economy grows, the job market in the state continues to profit. In November 2016 alone, the number of jobs in Texas increased by 20,900. The construction industry benefitted from this growth, steadily adding jobs from April through November 2016 (Texas A&M Outlook for the Texas Economy, 2017).

For HVAC contractors interested in working as independent contractors or opening an HVAC business, Texas is a great place to get started. In fact, the state ranked number 4 on Business Insider’s 2016 list of “The Best and Worst States to Start a Business.” Texas ranked highly because of the high success rate of businesses in the state, multiple clusters of major economic centers, and an affordable cost of living.

To give an accurate representation of what HVAC technicians in Texas can expect to make, we’ve recorded salary figures ranging from the median salary to the top 10% of HVAC technicians, broken down by average annual wages and hourly figures. This data, sourced from the US Department of Labor, represents fifteen of Texas’ largest cities.