Ohio ranked in second place on a top ten list of the best states to work in as an HVAC technician.Air Conditioning, Heating and Refrigeration NEWS

If you want to work as an HVAC technician and installer in Ohio or become a licensed HVAC contractor, you’re in luck: there are few states with a more straightforward licensing process.

In Ohio, you can enter the HVAC field immediately as an HVAC technician (more formally referred to as a tradesperson), working under the guidance and supervision of a licensed HVAC contractor. There are no state-mandated licensing requirements at this level, which means it’s all about meeting employer expectations and federal EPA (Environmental Protection Agency) certification for handling controlled refrigerants found in many HVAC and refrigeration systems:

Recent job listings for HVAC technicians reveal that many employers prefer entry-level HVAC technician candidates with some type of knowledge in the field gained through a formal HVAC technical school program or apprenticeship.

A formal HVAC program, resulting in either a certificate of completion/career diploma or Associate of Applied Science (AAS) degree, prepares students with intensive hands-on training and classroom instruction. 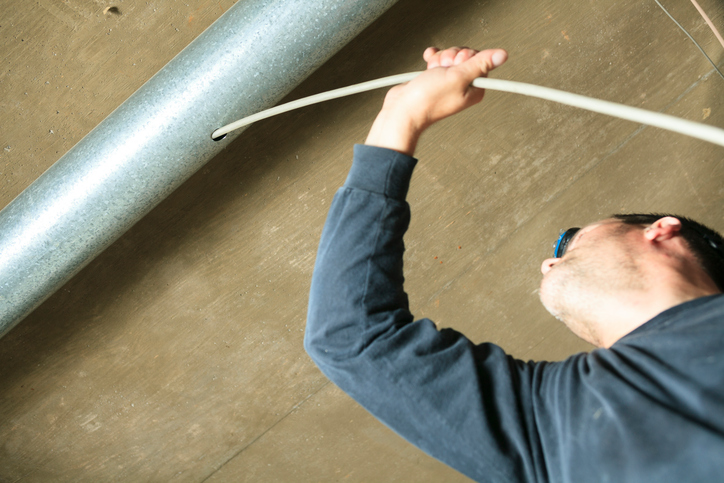 AAS programs also include a core of general education and business courses designed to augment the technical education.

Some of the topics covered in an HVAC program include:

Many of these programs offer online or blended (mixture of both campus-based and online learning) formats as an alternative to traditional, on-campus learning. Online HVAC programs feature interactive web and video technologies that enrich distance-based study.

Your HVAC education or apprenticeship will likely include information on this certification, which is required for HVAC technicians who work with refrigerant or with the hoses and gauges designed to measure refrigerant/pressure.

You must determine which type of certification you will need based on the type of systems you work with (Type II covers most standard residential and commercial systems.):

The OCILB has further facilitated the work of HVAC contractors by entering into reciprocity agreements with Kentucky, Louisiana, Tennessee, and South Carolina. This means as an Ohio HVAC contractor, you can travel to nearby states to perform HVAC installation and repair services without holding an HVAC license in those states.

If you want to make the transition from HVAC technician to licensed HVAC contractor, you must hold a license through the Ohio Construction Industry Licensing Board (OCILB). This requires first meeting the following minimum license requirements:

You must complete and notarize the Ohio Construction Industry Licensing Board Examination Application and send the completion application to the Board. Your application must include proof that you have at least 5 years of experience as an HVAC tradesperson. This includes attaching all W-2s and the license number of the contractor you worked under.

Note: The Board reviews applications only on the first week of February, April, June, August, October, and December. The Board must receive your application before the 20th of the month prior.

You must also pass a state and federal background check prior to sitting for the examination.

Once you have been approved by the Board, you will receive a PROV Candidate Information Bulletin, which includes instructions on how to schedule your HVAC exam. You can take this examination at Ohio testing centers located in:

Upon passing the examination, you must provide the Board with a copy of your examination results, a $25 check made payable to Treasurer, State of Ohio, and proof of at least $500,000 contractor liability insurance to receive your state license.

Once you hold an Ohio HVAC contractor’s license, you can apply for reciprocity in the following states by completing a Reciprocity Agreement:

HVAC companies in Ohio are riding the wave of new construction in Ohio.

According to the Associated General Contractors of America, in June 2016, the Buckeye State posted 209,300 construction jobs, compared to just 199,400 jobs in the year prior. This increase of nearly 10,000 construction jobs in Ohio was among the highest in the country. Ohio’s strong economy, which has led to an increase in the demand for new homes and development projects, is good news for HVAC technicians and installers and the contractors that employ them.

As of January 2017, 36 percent of Ohio construction companies reported to the Associated General Contractors of America that they expect to hire at least 6 workers in 2017.

In each of the ten cities we’ve included—Columbus, Cleveland, Cincinnati, Toledo, Akron, Dayton, Youngstown, Lorain, Elyria, and Stow—the recorded salaries are equal to or higher than the national median for HVAC technicians.

The data below, sourced from the US Department of Labor, shows the median to top 10% earnings in both annual and hourly figures. We’ve included figures from Ohio’s largest ten cities.

The Job Market for HVAC Technicians in Ohio

From 2014-2024, the HVAC job market is expected to increase by 14.9 percent in Ohio, with a total of 1,470 jobs opening up over the span of twelve years, or 300 jobs per year (Ohio Department of Job and Family Services, Ohio Labor Market Information).

In addition, the Associated General Contractors of America has recorded an increase in construction jobs across the state of Ohio (Dayton Business Journal, “Report: Ohio Construction Industry Booms”, 2016).

According to a 2013 article published by the Air Conditioning, Heating and Refrigeration NEWS, Ohio ranked in second place on a top ten list of the best states to work in as an HVAC technician. The states were ranked on a basis of accredited trade school locations, heating and cooling degree days, residential home values, and certified contractors located in the state. According to the article, Ohio offers an abundance of accredited HVAC schools—the most in the country. (“Study Reveals Top 10 States for HVAC Employment”, ACHR NEWS, 2013).