The top 10% of HVAC technicians in North Dakota make an average annual salary of $71,030 (or 34.15 an hour) as of 2015.The US Department of Labor’s Occupational Employment and Wage Statistics

HVAC installers and technicians in North Dakota are licensed at the city level. Though licensing requirements vary from one city to the next, the process of becoming an HVAC technician and installer in North Dakota usually includes earning on-the-job experience as an HVAC apprentice/technician and then earning licensure, first at the journeyman level, and then later at the master technician level.
Sponsored Listings
Featured Programs:
Sponsored School(s)

Standard requirements for the journeyman HVAC installer license at the city level in North Dakota:

Some of the North Dakota cities that license HVAC journeymen and master HVAC technicians include:

HVAC license levels and requirements vary slightly from one city to the next. In two of the states largest cities, requirements involve:

In Minot, both journeymen HVAC installers and master HVAC installers are licensed by the Minot Heating and Air Conditioning Board. Both license levels require taking and passing an examination and qualifying through experience or a combination of education and experience.

If you graduated from an accredited trade school or have completed at least 1,020 hours of instruction in HVAC or pipe fitting, you can substitute course hours for work hour requirements. The total number of hours is determined by each completed course and the grade received in that course.

To qualify to take the master HVAC installer license examination, you must have at least 2 years (3,400 work hours) of experience as a licensed journeyman HVAC installer.

The City of Fargo also licenses HVAC technicians and installers at two levels. However, these HVAC professionals are licensed as either:

Both license levels in both categories require candidates to pass an examination and meet specific education/experience requirements.

To qualify for a journeyman heating mechanic or gas installer license, you must have at least 4 years of experience as a technician. You can apply your education toward 2 years of the experience requirements.

To qualify for a master HVAC license, you must have at least 3 years of experience as a journeyman heating mechanic or gas installer.

You must first determine which type of certification you will need based on the type of systems you work with (Type II covers most standard residential and commercial systems.) and then take an examination covering a core section and a section that aligns with one of the following certification types:

If you work on AC (MVAC) systems in motor vehicles, you may also need to earn EPA Section 609 Certification.

You must hold a North Dakota State Contractor’s License through the North Dakota Secretary of State to bid or independently work on any job that is valued at more than $4,000.

If you are applying for a contractor’s license as a sole proprietorship or partnership, you must register your business name with the Secretary of State. You can learn more about business structures here.

To apply for a contractor’s license in North Dakota, you must complete a Contractor’s Application and send it to the Secretary of State, along with:

Although a slowdown has occurred in recent years following the oil and gas fracking employment boom, a rebirth for North Dakota may be in the making, with President Donald Trump already taking measures to advance the Dakota Access oil pipeline. 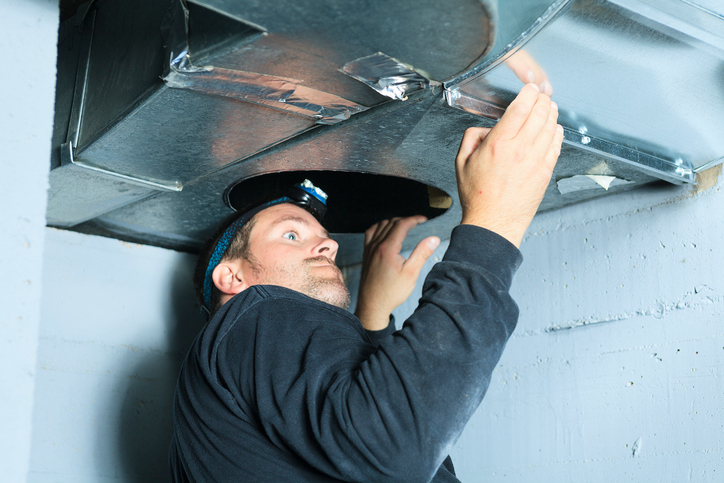 For example, a revitalization in Downtown Fargo has resulted in plenty of construction jobs. Developers interested in Fargo’s progressive business district are bringing a slew of arts, entertainment, and dining venues to the city, while renovations of old buildings on the outskirts of the city remain strong.

North Dakota’s growth spells opportunity for HVAC journeymen and master HVAC technicians. According to Job Service North Dakota, heating, air conditioning, and refrigeration mechanics and installer jobs are projected to increase 14 percent between 2014 and 2024, much faster than the average job growth rate in the state.

New HVAC techs, armed with the most recent knowledge and hands-on training in everything from servicing existing systems to installing the most technologically advanced automated systems, are valuable to the contracting companies reaping the rewards of a growing economy.

Fargo, Bismarck, Grand Forks, Minot, West Fargo, Watford City and Rugby—seven of the state’s most populous cities—are each recorded as having salaries that are higher than the national median for HVAC technicians.

We’ve collected data from the US Department of Labor Statistics showing the median to top 10% earnings in North Carolina’s 10 largest cities. The data is represented in both annual and hourly figures.

The Job Market for HVAC Technicians in North Dakota

In 2016, Info Forum noted that “the construction sector accounts for a higher percentage of [North Dakota’s] economy than in any other state and has for five years running,” which bodes well for skilled trade workers such as HVAC technicians (“For 5 Years Straight, ND Ranks No. 1 in Construction As a Share of Its Economy”, Info Forum, 2016).

According to a 2015 article in the Columbia Daily Tribune, North Dakota underwent an energy boom in 2010 that attracted workers, especially skilled trade workers. As a result, the state’s population grew by 10% from 2010-2015 Because construction industry jobs are in such high demand, HVAC skills are also in demand in the state (“Construction Industry Makes a Comeback”, Columbia Daily Tribune, 2015).