Instead of state-level licensing, professionals in Nebraska that service and install HVAC systems are licensed through the towns and cities they work in. These municipal licensing agencies have each established their own license programs, each of which has different costs and requirements. This means it takes careful planning in the Cornhusker State to decide what preparations to make to become qualified for the right local-level license. 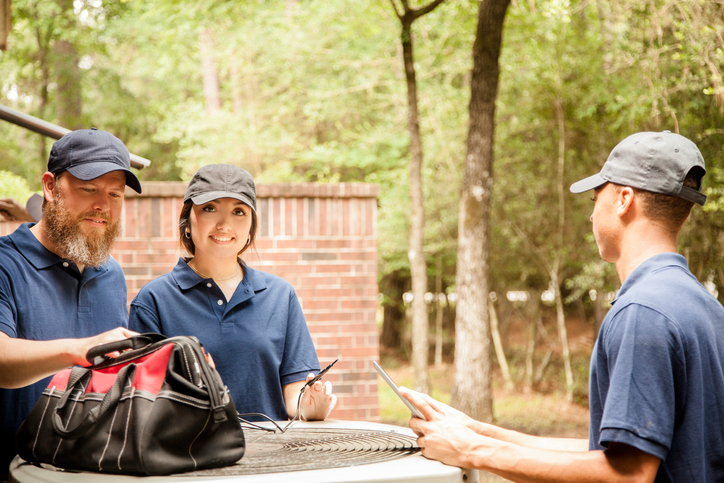 Fortunately, one route that always pays off when preparing for a career in HVAC-R is to attend a technical college or trade school program and earn a certificate of completion or associate’s degree in the field. Not only will the education help you prepare to meet both local licensing and federal certification requirements, but it will also help you present yourself as a strong entry-level job candidate and get ahead in the industry in general.

The typical process for entering the field starts with building your qualifications for an entry-level trainee job, then having your employer guide you in selecting the necessary license.

The Air Conditioning and Air Distribution Board (ACAD) governs HVAC technician and contractor licensing in Omaha.

The Omaha license program is somewhat complicated, with an unusual division of licensing categories based on specialization and project type, whether commercial or residential. Shown here is the standard licensing sequence from apprentice to master to contractor:

Omaha has reciprocal licensing agreements with the city of Bellevue and the state of Iowa and will waive the examination requirements for license holders with credentials from those agencies. Additionally, Omaha may waive the exam requirement for license holders from any other state or municipality who can demonstrate that their own initial licensing exam was equal to the Omaha exam and that they passed with an acceptable score.

Licenses are good for one year, expiring on December 31st. Journeymen and master licenses holders must undergo at least four hours of continuing education each year, from one of the following approved organizations:

Licensing in Lincoln is managed by the city Board of HVAC Examiners. The city offers three grades of licensure, combining technician with contractor licensing at the higher levels:

The process is examination based so there are no time or experience requirements. This makes it possible to go directly from an apprenticeship to the master license level for those interested in opening up an HVAC business.

Both journeyman mechanical technician and master mechanical contractor exams are offered at regular intervals, on the third Wednesday of January, April, July and October.

The exams are based on the Lincoln Fuel Gas Code and the Lincoln Gas Piping Code, both of which are available online to study.

Master mechanical contractors are required to maintain minimum liability insurance coverage of $500,000 and keep a certificate on file with the city. They are also required to undergo at least 8 hours of continuing education each year and to submit proof of that education to the board at time of license renewal. Renewals are annual for all three license categories.

HVAC Licensing in Other Nebraska Cities

Several other cities in Nebraska require HVAC or mechanical license, including:

Other cities may also have local licensing requirements; check with city building department for details.

Registration is straightforward and does not require any testing or proof of experience. There is a $40 fee and renewals are due annually at the same rate. If you have employees, you may have to fulfill some other requirements, such as providing proof of worker’s compensation insurance.

Local contracting licenses may be required in some cities in addition to the state contractor’s license.

No matter where in the US you perform HVAC work, you are likely to need a federal credential known as a Section 608 certification.

The title refers to section 608 of the Clean Air Act, which is the section that deals with the safe and proper handling of certain controlled refrigerants. Anyone working with controlled refrigerants including Freon and ammonia must be properly certified. Because the gases are common in modern air conditioning systems, you will probably have to get at least one type of Section 608 certificate:

Fortunately, most trade schools and college programs in HVAC-R include specific preparation for the Section 608 certification exams. In fact, most of them also offer the exam itself as a part of the program, so you can graduate with a certification already in hand.

As HVAC systems become more and more advanced, the knowledge requirements for HVAC technicians has followed suit. Formal classroom education cannot completely substitute for on-the-job experience in the field, but it can lay a solid foundation for understanding the technical aspects of HVAC installation and repair work.

The Nebraska Department of Labor’s NEWorks forecast expects HVAC-R job growth to be robust in Nebraska over the course of the next decade, projecting a 19.2 percent increase in industry jobs during that period. The Omaha World Herald reports that the construction sector in general is the fastest growing industry in the state, driven in part by a somewhat surprising tech industry boom taking place there. According to the Lincoln Journal, Nebraska had the third fastest rate of growth of technology jobs in the nation in 2015, beating out traditional technology hubs like Washington, California, and Georgia.

New construction in the Plains states, with their extremes of heat and cold, almost always means new HVAC installs. Skilled technicians are going to be in demand to put those systems into place, and to maintain and service them for years to come. A strong background in the theory and practice of HVAC-R technology will help keep you at the forefront of the field as growth continues in Nebraska.

Nebraska offers a wealth of options for its 2,100+ HVAC technicians ranging from working for building equipment contractors to the sales office for the global HVAC company TRANE® in Ralston. This company specializes in creating energy-efficient and sustainable HVAC systems and is known worldwide for the quality of its products.

Experienced HVAC technicians in Lincoln earned exceptionally high salaries. Those in the top 10% earned an average of $19,480 more than the national average for technicians in this salary bracket.

In fact, the US Bureau of Labor Statistics reported that Lincoln’s HVAC techs in the top 10% earned the 16th highest salary in the country out of the 382 metropolitan areas that it analyzes.

The Nebraska Department of Labor provides salaries for HVAC technicians in the state’s major metropolitan and rural areas. The ranges below show the median to top 10% yearly and hourly earnings throughout Nebraska.

With the construction industry is on a roll in Nebraska, the future for HVAC technicians in the state looks rosy. Predictions from the University of Nebraska-Lincoln’s Bureau of Business Research indicated that employment levels in construction in the state “will reach a record level” in 2016 and continue growing in 2017 and 2018.

In fact, the construction industry should be the fastest-growing sector of Nebraska’s economy through 2018. Employment levels should top their pre-recession peak by that time.

HVAC technician jobs in particular are increasing at high levels. The Nebraska Department of Labor predicts that the number of jobs for HVAC techs in the state will increase more than 2-times faster than the average in the state between 2014 and 2024.

The predicted increase of 19.32% should add nearly 700 new jobs for HVAC technicians in Nebraska during the ten-year period of this analysis. The rate of increase is expected to be even greater in Lincoln, with the Department predicting 21.32% more jobs to be added.