The Department predicts that the number of jobs for HVAC professionals will increase by more than 15% between 2014 and 2024 – more than 2 and a half times faster than the overall average job growth rate in the state.The Illinois Department of Employment Security

Illinois does not have a licensing process in place for entry and mid-level HVAC professionals. The state only requires that individual HVAC contractors and contracting companies operating in the state hold licenses. This means that entering the field and advancing within the profession is all about meeting federal certification requirements and employer expectations.
Sponsored Listings
Featured Programs:
Sponsored School(s)

A lack of state regulations for qualifying to work on HVAC systems means that HVAC contracting companies are very selective in choosing job candidates with some existing skills and a lot of aptitude. You’ll often encounter employer preferences or requirements that include:

Employers often express a preference for HVAC technicians who have graduated from a relevant trade school or technical college program. That’s because HVAC education programs give graduates the key skills employers are looking for, including an understanding of: 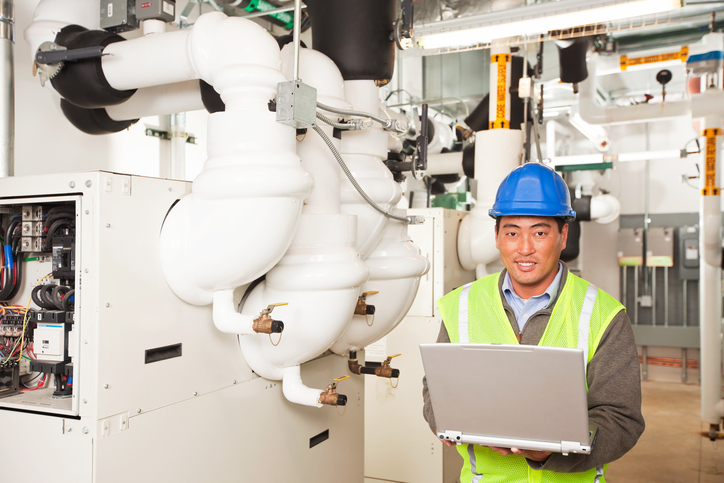 Earning an HVAC degree can even fulfill the education requirements to become a contractor in some cities.

There are four types of certification options you can choose from depending on what type of work you’ll be doing:

To earn any of these certifications you must pass the EPA exam specific to the certification type. You can often find same-day education and certification programs locally. If you’re earning an HVAC degree from a college certification prep courses and the exam itself may be included in your curriculum. If you’re going directly into the job market, your employer can provide you with more information.

Becoming a union HVAC technician means going through approximately four or five years of an apprenticeship that is paid, on-the-job training combined with classroom education on the weekend or evenings. During this time you’ll develop the foundational skills you need to succeed in this industry on a general professional level. You’ll also have the chance to specialize in different areas of HVAC including:

Union HVAC apprenticeships can be arranged through plumbers and pipefitters unions or sheet metal workers unions. Contact your local union for information on how to apply for an apprenticeship. Once you’re accepted the union takes care of your on-the-job training and education through a joint apprenticeship training committee (JATC). It’s possible to start earning a wage from the first day of your apprenticeship.

Unions that have HVAC apprenticeships in Illinois include:

Once you finish your apprenticeship you can test to become a journeyman. When you’re a journeyman you have more independence and are free to search for an HVAC job anywhere you like, or pursue a contractor’s license and go independent.

Contractor Licenses for Your Own HVAC Business

You don’t need a contractor license if you’re working for someone else. If you are an employee the information in this section does not apply to you.

But if you want to start your own business and either work independently or hire employees you’ll need to know about the contractor licensing requirements in the areas where you offer services.

These are some common features of contractor licenses but could be different for your jurisdiction:

These are the contractor license requirements for some of the biggest cities in Illinois:

Chicago Contractor License
If you do any HVAC work in Chicago as an independent company you’ll need a general contractor license issued by the city’s Department of Buildings. Chicago has arranged for Continental Testing Services to manage its contractor license application process.

There are five different classes of the general contractor license that designate the dollar limit per contract project that you can work on:

You don’t need to take an exam for this license. To apply fill out an application and include:

You’ll need to renew your license each year. Doing this requires keeping all your insurance policies up-to-date and demonstrating good business and financial practices.

Rockford Contractor License
In Rockford you’ll need to apply for a mechanical license with the city’s Mechanical Board. To be eligible you must pass the appropriate exam, post a surety bond, and meet one of the following conditions:

When you fill out an application you’ll have to choose which class of mechanical license you’re applying for:

You must renew your license every year.

You’ll also need the following when you apply:

Make sure to renew your license with the city every year.

Illinois is a national leader in the HVAC industry. The Chicago metro area employs the eighth-largest number of HVAC technicians in the nation, while techs in the Elgin area earn the eighth-highest average salary in the nation (US Department of Labor, 2015).

Add a climate with four seasons to Illinois’ strong economy, industrial growth, plus residential expansion and it’s no wonder that the demand for HVAC technicians in Illinois is so strong. Nationally, Illinois has the fifth-largest economy of all states, larger than the economies of the 13 smallest states combined.

The industry insight and analysis journal BusinessClimate described in 2015 how the world’s future in aviation and aerospace was being formed in the Rockford area, which is home to more than 200 companies that provide specific technological innovation in areas like electric power systems.

As industry growth pushes the demand for HVAC technicians up so do government policies. As technology improves and energy becomes more expensive, state and local governments are under ever mounting pressure to reduce public expenditures by increasing energy efficiency. Early investment in upgrading an HVAC system is an easy way to make energy efficiency pay for itself and then some. One such program is known as the retro-commissioning program (RCx), managed by the Illinois Department of Commerce.

RCx is for public sector buildings like schools and government facilities. The program involves the state’s Department of Commerce funding a detailed analysis of public buildings to determine the most effective ways of reducing energy consumption in accordance with the building’s design parameters. HVAC technicians then come in and make all necessary changes to maximize energy savings.

Utility companies like ComEd also offer rebate and energy efficiency programs that encourage those in the residential and commercial sectors to swap out their less-efficient HVAC systems for the latest in efficient HVAC innovations.

In Illinois it’s a multi-sector effort that has combined to drive the demand for HVAC technicians. The Illinois Department of Employment Security projects that jobs for HVAC technicians will grow by 15.5 percent over the decade leading up to 2024, higher than the national average of 13.6 percent.

The Department predicts that the number of jobs for HVAC professionals will increase by more than 15% between 2014 and 2024 – more than 2 and a half times faster than the overall average job growth rate in the state. This level of growth should generate an average of 237 new positions each year during the ten-year projection period.

Chicago is a hot spot for construction in the state. The US Bureau of Labor Statistics reported that the Chicago-Naperville-Arlington Heights area had the 8th highest number of jobs for HVAC technicians in the country in 2015.

Reasons for this include more commercial development downtown as the area enjoys a thriving economy and growing job market. And more commercial and office construction almost always means a residential building boom is soon to follow.

Chicago’s expanding high-tech industry has shown a preference for more affordable loft-style office space over the prohibitive cost of leasing space in glass and steel skyscrapers. In many cases, this means renovating existing buildings, which almost always involves updating to new heating systems and ductwork.

Nationally, construction in November 2016 hit a 10-year high according to the Associated General Contractors of Illinois and contractors are eager to hire and sub-out to qualified HVAC specialists.

HVAC Salaries in the Largest Cities in Illinois

The US Department of Labor provides the salaries for HVAC technicians throughout Illinois as of 2015. The ranges shown here represent the median to the top 10%.

*Exceeds the national average for the salary categories shown.