Statewide, Hawaii’s HVAC techs were the third highest paid in the country in 2015.US Bureau of Labor Statistics (BLS)

If you’re going to work as an independent contractor and business owner you’ll need to hold an appropriate contractor license in order to bid job valued at more than $1,000. Among the requirements for a contractor license is having four years of supervised work experience.
Sponsored Listings
Featured Programs:
Sponsored School(s)

If you’re working as an employee of a company then you DO NOT need a contractor license. 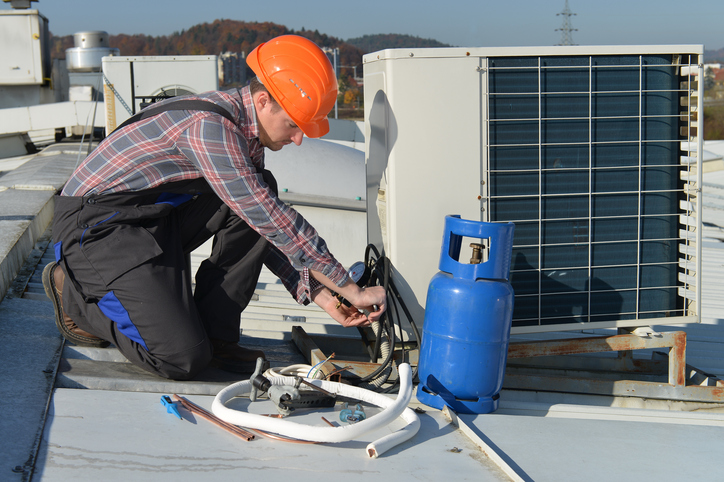 However, all HVAC technicians and installers in Hawaii, including employees and contractors, must hold Section 608 certification from the federal Environmental Protection Agency (EPA) relating to the Clean Air Act.

HVAC companies throughout Hawaii also have their own preferences and requirements for hiring employees. While these are not legal requirements, they may be expected by prospective employers:

Some HVAC education programs include EPA Section 608 certification preparation as part of the curriculum. You can also count up to one year of your education towards the supervised work experience requirement for a state contractor’s license.

Completing an HVAC education program also gives you the specific skills that employers are looking for:

If you’re going to be working with pressurized refrigerant in any capacity then according to federal law you must become certified under EPA Section 608. There are several types of certification options you can choose from depending on what type of work you’ll be doing:

Type II covers most residential and small commercial systems, so it is standard for most HVAC technicians. Employers will specify which type of EPA certification they prefer or require.

Some trade school programs include preparation for EPA certification as part of their curriculum.

EPA Section 608 certification courses and tests are available through many providers in Hawaii. Your school, prospective employer, and the EPA can provide you with more information about the nearest training and testing location. Some locations offer same-day classes, testing, and certification.

Qualifying for Your HVAC Contractor License

The contractor license is issued through Hawaii’s Department of Commerce and Consumer Affairs (DCCA), Professional and Vocational Licensing Branch.

Remember you only need this if you’re going to work on contracts that are worth more than $1,000 and any of the following apply:

To qualify for a contractor license you must:

What Type of Contractor License to Get

Hawaii issues licenses for three types of contractors. For bidding and working jobs related to heating, ventilation, and air conditioning, you will need to hold the Class C Specialty Contractor license.

The specialty contractor license for HVAC work is the C-52 Ventilating and Air Conditioning Contractor license. This covers you if you’re doing work that involves the fabrication, assembling, and/or installation of:

The C-52 license should cover you for most if not all HVAC work you’re doing.

Getting your contractor license involves passing an exam. You would apply by first filling out an application, which will include providing proof that you’ve fulfilled the four-year supervision requirement by having fellow employees, an employer, or another professional who has direct knowledge of your experience sign off on the Chronological History of Projects Form. Experience must be gained within the last 10 years. Up to one year of relevant HVAC education can be applied towards this requirement. Along with your application you will also include:

Send your complete application to the DCCA’s Contractors License Board with the Professional and Vocational Licensing Branch in Honolulu.

Testing for Your Contractor License

Once the Contractors License Board approves your application it will send your exam registration forms. Use this information to register with Prometric, the company Hawaii works with to administer exams. After you submit your registration information to Prometric they will send you an exam date and location. Typically exams take place each month at the following locations:

Once you’ve successfully registered for your exam with Prometric they will send you an admission letter. Make sure to bring this with you when you arrive on testing day.

You can familiarize yourself with the overall exam using Prometric’s contractor candidate information bulletin (CIB). The exam itself is divided into two parts:

Receiving and Maintaining Your Contractor License

Once the Hawaii Contractors License Board receives your passing exam results you will be notified that you must pay a licensing fee. Upon doing this you receive your license, and you are officially considered a contracting entity.

All contractor licenses expire on September 30th of even-numbered years. You’ll get a renewal application in the mail 45 days prior and must have it returned by the September 30 expiration date. To be eligible to renew you must continue to meet these conditions:

Factors Contributing to the Strength of Hawaii’s HVAC Market

Hawaii’s tropical climate brings with it many advantages as well as the constant need for air conditioning in many parts of the islands. Daily highs usually reach 88°F in the summer and 83°F in the winter.

The frequent use of AC in the hot climate combined with the high cost of electricity in the state have made it imperative for residents and businesses alike to upgrade frequently to the most energy efficient HVAC systems. This, along with the expanding population has helped spur strong demand for techs and installers. And with a greater demand comes higher salary offers. In fact, the U.S. Department of Labor recognizes Hawaii as offering the second-highest HVAC salaries in the nation with a statewide median of $61,330 ($29.49 hourly).

One example of an energy efficiency incentive program is sponsored by a partnership between the Hawaii Public Utilities Commission and Leidos Engineering. Known as Hawaii Energy, this program offers cash rebates to residents who want to invest in energy-efficient equipment.

State projections indicate that construction will grow faster than any other industry in Hawaii through 2022, creating more work and job opportunities for skilled trades like HVAC.

This kind of growth means Hawaii’s HVAC specialists can look forward to more opportunities to advance, work overtime and see pay rates increase as employers compete for a limited number of skilled technicians.

Statewide, Hawaii’s HVAC techs were the third highest paid in the country in 2015 according to the US Bureau of Labor Statistics (BLS), a trend that’s expected to continue. And it’s not just those working in the big city of Honolulu that are making the big money. Both urban and rural HVAC techs enjoyed top earnings:

The US Bureau of Labor Statistics provides the salaries for HVAC technicians in Hawaii’s major city and the rural parts of the state. The ranges below show the median to top 10% yearly and hourly earnings of HVAC techs.

Most HVAC technicians work in the building construction industry according to the US Bureau of Labor Statistics. Predictions from the state of Hawaii suggest that this industry will boom throughout the state between 2012 and 2022. The rate of increase over this 10-year period is shown below for several major counties in the state: