In addition to the EPA Section 608 certification, most, if not all, prospective employers are going to expect one or more of the following, however the letter of the law does not require you to meet these standards:

Earning a diploma/certificate or Associate of Applied Science (AAS) in HVAC-R through a local community college or trade school can count for up to half of the four years of experience required to earn a contractor license:

Select programs will also walk you through the process of earning the required EPA Section 608 certification.

By completing a technical training program you’ll also graduate with the exact job skills employers are looking for:

Holding EPA Section 608 certification is a requirement of federal law and applies to all HVAC technicians that will be working with pressurized refrigerant in any capacity. There are three EPA certification options, depending on what types of work you’ll be doing:

Type II covers most residential and small commercial systems, so it is standard for most HVAC technicians. Employers will specify which type of EPA certification they prefer or require.

Some trade school programs include preparation for EPA certification as part of their curriculum.

EPA Section 608 certification courses and tests are available through many providers throughout Georgia. Your school, prospective employer, and the EPA can provide you with more specific information about the nearest training and testing location. Some locations may offer same-day classes, testing, and certification. 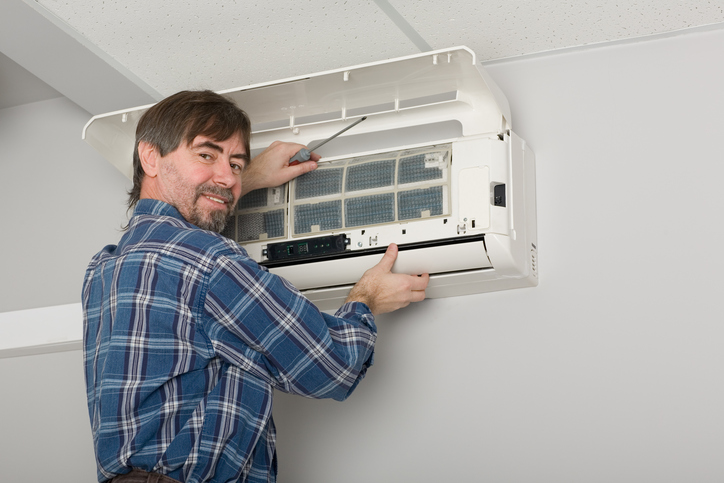 Anyone interested in establishing an HVAC business and working independently, hiring employees, and bidding jobs must obtain a contractor license. However, in Georgia, a contractor license is also a valuable asset for HVAC professionals that work for a shop since it demonstrates experience and expert-level aptitude. Licensed contractors working as employees often serve as job foremen or in other leadership positions.

Employers or contracting parties will often specify which class of license they prefer or require.

To be eligible for either of these licenses you must:

Experience and Education Requirements
For both license types, you may be able to subtract up to 2 years of experience if you hold an AAS degree in HVAC-R and up to 1 year if you hold a certificate/diploma in HVAC-R.

The restricted license requires a minimum of four years of experience performing HVAC service and installation consistent with state and national codes.

This requires a minimum of five years of experience performing HVAC service and installation consistent with state and national codes.

Taking the Exam and Applying for Licensure
Once you’re eligible to take the exam you can fill out an application for examination and licensure and indicate which license class you’re testing for.

A complete application includes three professional references from other professionals who have worked with you directly on HVAC projects where you were responsible for the installation, design and the supervision of entire projects. References can be registered architects, professional engineers, city or county inspectors and/or licensed conditioned air contractors (reference forms are included in the application).

Once the board has received your full and complete application it will send you a letter of approval. The board’s testing vendor Applied Measurement Professionals (AMP) will also send you a candidate information bulletin (CIB) which includes testing registration and test content information. You would then schedule the date and location to test through AMP and pay the exam fee.

You’ll find it helpful to review AMP’s CIBs and testing information for the appropriate exam:

You will receive notification within three weeks of passing the exam and your license will be issued through the Georgia Board of Conditioned Air Contractors soon after.

Before bidding jobs or offering your services independently, you will need to secure a $10,000 (cash or surety) business bond to be deposited with a probate court judge in the county where you primarily engage in work.

Reciprocal Licensing for Military Personnel
If you’ve received a general or honorable discharge from the US military and the training or experience you received was similar to the requirements for a Conditioned Air Contractor License, you may be apply for your license without further education and training. Your application must be made within 180 days of your discharge.

If you are married to an active duty service member and you hold a contractor license in another state with requirements similar to Georgia’s, you may qualify for reciprocal licensing if your spouse’s military obligations require relocating to Georgia.

The HVAC market in Georgia is strong for many reasons:

With construction booming in Georgia, the state’s Department of Labor predicts that the number of jobs for HVAC technicians will increase by more than 20% between 2014 and 2024. The Atlanta-Sandy Springs-Roswell area, in particular, presents some unique opportunities for HVAC techs. In fact, as of 2015 the US Bureau of Labor Statistics has identified the area as having the 3rd highest number of HVAC tech jobs of any metro area in the nation.

Georgia received national press for the strength of its construction industry. Oldcastle Building Construction conducted an analysis of the construction forecast for 2016 and reported that Georgia was one of the three states “leading the expansion.”

Even the Wall Street Journal featured Georgia in a 2017 article that described how developers and investors are snapping up empty lots in subdivisions that were abandoned during the downturn in the late 2000s.

With the recent surge in construction, skilled workers are in short supply both nationally and in Georgia. Trey Anderson, President of the Associated General Contractors of Georgia, Inc., considers the need to overcome a shortage of skilled workers and managers one of the three most pressing issues that face the construction industry in the state.

The US Department of Labor provides the hourly wages and annual salaries for HVAC technicians in the major metropolitan areas of Georgia as of 2015. Shown here are salaries and hour pay rates ranging from the median to the top 10%.