It is expected that between 2014 and 2024 the number of HVAC jobs will grow by 33.4 percent. That comes out to 1,350 job openings every year on average.The Florida Department of Economic Opportunity

Florida is the granddaddy of all state HVAC markets: between the hot, humid climate and the steady influx of retirees looking to spend their golden years in comfort, the state clocks in first in the nation when it comes to HVAC jobs. It is also well-known in the industry for stringent contractor licensing requirements and for having no reciprocal licensing agreements, which make it a particularly difficult market to crack. 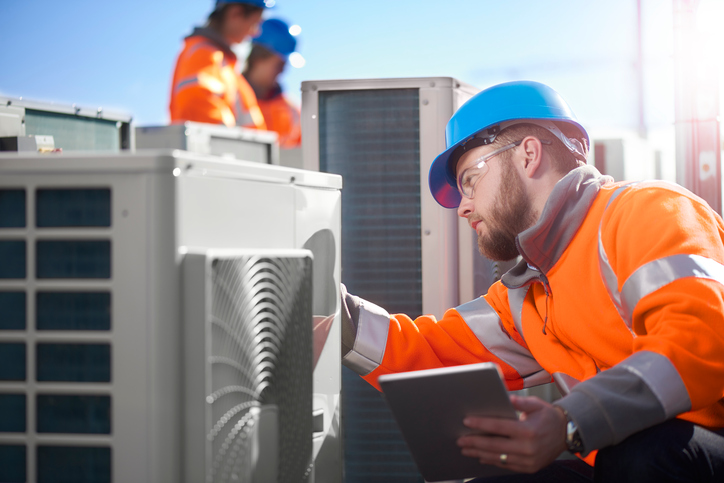 An air conditioning engineer is finishing the installation of several units on a rooftop.

Although there is no state-wide HVAC technician licensing requirement, the state’s most populous metropolitan area, Metro-Dade County, requires licensing for individual technicians, as do several other Florida counties.

Although licensing requirements vary slightly where mandated, one thing that is the same no matter where you go in the state is that EPA Section 608 certification is required for many HVAC-R jobs.

Many trade schools and college HVAC programs offer Section 608 certification as part of their courses. And many municipalities accept school diplomas or certificates as at least part of the component for licensing qualifications.

Having the right training to understand and work with modern, high-efficiency HVAC systems is a solid first step on the path to a career in the industry.

Cities and Counties in Florida That Require Licenses for HVAC Work

Since Miami-Dade County covers a large swath of southern Florida that includes some of the state’s largest cities, the HVAC tradesman certification process here is among the most relevant to the state’s 25,000 HVAC technicians and installers.

Miami-Dade County’s Contractor Licensing Section licenses both tradesmen and contractors working in Miami-Dade. Qualifications are established and reviewed by the Construction Trades Qualifying Board. The board issues licenses for more than 100 different trades, but those most relevant to HVAC technicians are:

Full descriptions of the exact tasks and limitations of each certification are available in Miami Dade Ordinance 10-2.

The county issues both journeyman and master certificates of competency in each of these categories. The steps to achieving journeyman status are identical for each:

Prov, a third-part testing service administers the exams. There are six different testing locations in the county, and tests can be taken either on a computer or by pen and paper.

Other Florida Counties With Technician Licensing or Certification Requirements

Although Miami Dade is the largest county with HVAC certification requirements, it’s not the only one in the state that requires licensing or certification for technicians, contractors, or both. Others include:

EPA Certification is a Requirement for Most HVAC Mechanics and Installers

Although you may plan to find a job in a part of Florida where there is no HVAC licensing requirement, that doesn’t mean you won’t need any certifications at all to work legally. The federal government regulates environmentally-sensitive and hazardous refrigerant gases such as Freon or ammonia-based gases under the Section 608 of the federal Clean Air Act. If you work on installing, maintaining, or pressure-testing any system using such chemicals—and most HVAC technicians do—you will need a certificate to legally perform the work.

There are four different categories of Section 608 certification:

Almost all HVAC trade school or college programs specifically teach the information tested on the Section 608 exams, and most of them also offer the certification test itself as a part of their curriculum. This means you can graduate with your Section 608 certificate already in hand, making you considerably more employable all around the Sunshine State.

How to Become an HVAC Contractor in Florida

In order to advertise, bid, or take contracts on HVAC-R jobs in Florida, you will require a contractor’s license. The state Department of Business and Professional Regulation’s Construction Industry Licensing Board (CILB) issues contractor licenses to both individuals and companies in Florida.

Many counties have their own contractor licensing requirements. This is the case in Miami Dade and Palm Beach. But this doesn’t mean contractors in these areas necessarily need to hold both a state and county license. To manage this, CILB offers two types of contractor licensing, certified and registered:

Common Requirements for Both Certified and Registered Contractors

The business and finance exam is available exclusively through Pearson VUE. The Air B exam is also available through Pearson, but the Air A exam is only offered as a pen and paper test through Professional Testing, Incorporated. Exam dates are offered in three locations (in Northern, Central, and South Florida):

The total cost for testing will be $215.

It’s possible to upgrade from a Class B to a Class A license after one year of experience at Class A, but you will still have to take and pass the Class B trade knowledge exam.

These steps will allow you to qualify as an individual operating as a contractor, but it’s also possible to qualify a business entity instead. In that case, you must still have a qualifying agent that meets all of the same requirements, but it is possible to use a different person as a Financial Responsibility Officer, who can then take on the financial responsibility and business and finance knowledge qualifications separately.

The fees for licenses are based on whether you are using the certification or registration process and when you file for the license:

The renewal fee for both types of license is $209.

Certified contractors must perform 14 hours of continuing education during each license period. The CE credits must come from a state-approved provider. You can find a list of those providers here.

Florida is a mecca for HVAC-R technicians and contractors. The year-round cooling demand there provides constant business and a booming economy fuel a strong demand for both new HVAC installations and continuing service and replacement of older systems.

This demand is reflected in the Florida Department of Economic Opportunities latest projections, which see a 33 percent increase in HVAC-R employment over the course of the next decade.

But the market is constantly shifting and the trend toward computerized HVAC systems, sophisticated zone sensors, and high-efficiency equipment means that education is paramount in finding jobs as an HVAC technician. A certificate or associate’s degree in HVAC-R technology is a solid first step on the path to employment in Florida’s booming air conditioning sector.

Florida has some of the best prospects for HVAC technicians according to 2015 statistics from the US Department of Labor:

Nationally Florida has the fifth-highest projected rate of HVAC job growth. The Florida Department of Economic Opportunity projects that between 2014 and 2024 the number of HVAC jobs will grow by 33.4 percent. That comes out to 1,350 job openings every year on average. To put this in perspective, the national job growth rate for HVAC technicians over this same time period is just 13.6 percent

Part of the reason why HVAC technicians are in such strong demand in Florida is because of environmental efficiency policies taken by the state. 2016 marked the year when the state code was updated to now require new HVAC units to have a seasonal energy efficiency ratio (SEER) of at least 14. If Floridians install anything less then it will be a violation of the law and could void the manufacturer’s warranty. In addition to making Florida a more environmentally efficient state, this policy has also stimulated the demand and salaries for HVAC technicians.

HVAC demand will also always stay as hot as Florida’s summers. As it remains strong, schools and training programs are struggling to keep up with Florida’s demand for skilled HVAC technicians.

A 2016 article in The Florida Times-Union’s jacksonville.com details one HVAC apprenticeship program sponsored by the Northeast Florida Builders Association (NEFBA). Employers pay the cost of their apprentices to gain education and training, while the apprentices themselves earn a wage while enrolled. The article describes HVAC apprenticeships as opening a world of opportunities while providing, “…on-the-job training and related classroom instruction in skilled, high-demand, well-paying occupations.”

2015 US Department of Labor statistics show the average salary for an HVAC technician in Florida is $19.31 an hour or $40,160 annually. More experienced HVAC technicians in the 90th percentile earn $60,260 per year.

The following salaries represent hourly and annual statistics. They are presented as a range between the median and the 90th percentile. Numbers are sourced from the US Department of Labor in May 2015: