Between 2014 and 2024 it estimates the number of these jobs will increase by 17.9 percent, with an average of 70 openings every year. That is significantly higher than the national projected growth of HVAC technician jobs during the same period, 13.6 percent.The Delaware Department of Labor (DOL)

If you want to independently provide HVACR services in Delaware you must be licensed through the state’s Board of Plumbing, Heating, Ventilation, Air Conditioning and Refrigeration Examiners, under the Division of Professional Regulation.
Sponsored Listings
Featured Programs:
Sponsored School(s)

There are two types of HVACR licenses in Delaware:

If you want to do work in more than one of these niche areas, then you’ll need to get an Unrestricted Master HVACR license.

Employers almost always prefer applicants who have or who are on their way to earning a master’s HVACR license. Additional employer preferences often include:

Employers prefer graduates of college HVACR programs because an AAS or diploma is a concrete demonstration of vital industry skills. Many HVACR school programs also include a segment for EPA Section 608 controlled refrigerant certification.

You can qualify for a restricted or unrestricted master HVACR license once you fulfill these requirements:

You can fulfill the experience requirement through either ONE of these routes:

You earn a wage and go to school during your apprenticeship. It includes the following:

By taking this route to fulfill the experience requirement you must complete these three steps in order:

Sponsors of apprenticeships can include private employers, industry organizations, and labor/trade unions. For example, the union UA Local 74 Plumbers and Pipefitters in Newark offers an HVACR apprenticeship. To get more information about available apprenticeships do a search for companies in your area offering apprenticeships or contact the Delaware Department of Labor.

Your classroom instruction takes place at one of Delaware’s trade schools or community/vocational colleges with an HVACR program. It is possible to transfer related credits you’ve already earned toward your apprenticeship classroom education requirements. Check with your apprenticeship administrator for more information about transferring credits. 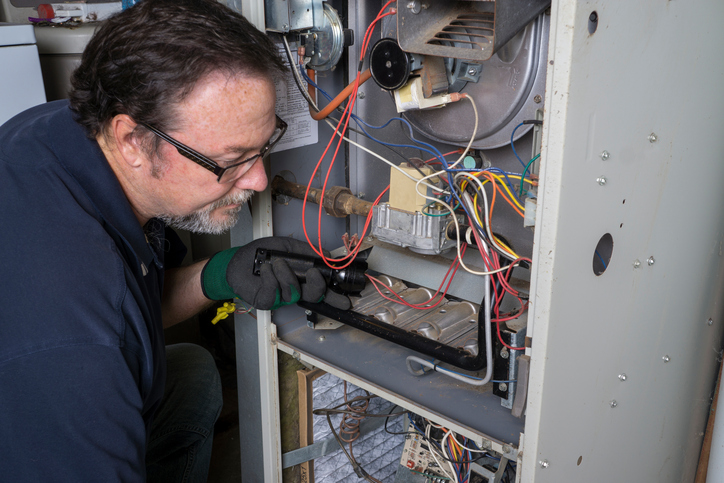 By taking this route to fulfill the experience requirement you must accumulate seven years of work experience in general HVACR work or in the specialty area for which you are pursuing a license (master HVACR license (unlimited) or a master HVACR restricted license in one of six categories).

This work experience must be supervised by a master HVACR licensee with the same type of license you are pursuing.

Once you have seven years of work experience under your belt you’ll need to pass the apprentice equivalency test. You initiate this by completing an application for a master HVACR license (restricted or unrestricted) with the Delaware Board of Plumbing, Heating, Ventilation, Air Conditioning and Refrigeration Examiners.

After you fill out your license application the board will review your experience and send you information about registering for the Apprenticeship By-Pass Exam.

Once the board has notified you that you can take this exam you need to schedule your testing date by contacting one of the following schools:

Send the results to the board after you pass the exam by scoring at least 70 percent.

Applying for a License and Passing the Master HVACR Exam

HVACR Application with the State of Delaware

Once you’ve met all other requirements except for passing the master HVACR exam (restricted or unrestricted) you can fill out an application for licensure with the Delaware Board of Plumbing, Heating, Ventilation, Air Conditioning and Refrigeration Examiners. Once your application is determined to be complete the board will grant you approval to take the appropriate master HVACR exam.

The Delaware Board of Plumbing, Heating, Ventilation, Air Conditioning and Refrigeration Examiners grants you approval to sit for the exam by sending you an examination registration form. Send this completed form along with the specified examination fee to Prometric Testing Services. This is the company that Delaware has contracted with to administer the master HVACR exam.

The Delaware board maintains a webpage the details exam dates and locations. The exam is offered in the Dover/Harrington and Newark areas three or four times per year. You must score at least 70 percent to pass, and once Prometric issues you a passing score report send this to the Delaware Board of Plumbing, Heating, Ventilation, Air Conditioning and Refrigeration Examiners.

There are two parts to the exam: (1) Business and Law, and (2) HVACR-Specific section.

All applicants must take the business and law exam. You have two hours to complete 50 questions that cover topics from labor laws and project management to contracts and tax laws.

You are allowed to bring the following two reference books with you to consult during the exam (you can use earlier editions at your own risk):

The second part of the exam you take is related to the type of master HVAC license you are applying for. The exam for the master HVACR license (unlimited) is 100 questions with a four-hour time limit. It covers the following subjects:

You’re allowed to bring these reference materials with you to consult during the exam (you can use earlier editions at your own risk):

If you are taking an exam for one of the six areas of the master HVACR Restricted license then your exam will cover general HVACR topics, safety, and content that is related to your specific area of specialization.

After you’ve submitted your passing results to the Delaware board you’ll receive your master HVACR license (restricted or unrestricted). At this point you can start your own business, provide HVACR services independently, hire employees to work for you, or work for an HVACR company without supervision.

Renew your master HVACR license. Do this before it expires, which happens on all even-numbered years on October 31st. A few weeks before your license expires the board will mail you information on how to renew it online by paying a renewal fee.

HVACR License Reciprocity with Other States

If you have an HVACR license in good standing that was issued by another state, and the requirements for earning this license were substantially similar to Delaware’s, then you can apply for the similar master restricted or unrestricted license in Delaware. You’ll need to have your state’s HVAC/R licensing board fill out the verification of licensure form (included in the reciprocity license application packet) and return this to the Delaware board.

If you are granted a license based on reciprocity you don’t need to take a master HVACR exam.

If you have an HVACR license in Connecticut or Maryland you are not required to submit proof of fulfilling the experience requirement.

If you have an HVACR license from any of the following states you are required to submit proof of fulfilling the experience requirement:

If you are from any other state then you must submit a copy of your jurisdiction’s HVACR licensing laws and the Delaware Board of Plumbing, Heating, Ventilation, Air Conditioning and Refrigeration Examiners will evaluate your experience on a case-by-case basis.

In general the board does not grant reciprocity for HVACR licenses that are issued by non-state agencies, such as county or city governments (with the exception of Washington DC).

You’ll need a state-issued master plumber license in addition to a master HVACR (unlimited or restricted) license if the work you’ll be doing involves design, installation, construction, replacement, servicing, repair, alteration, or modification of the pipes, fixtures, and other apparatus used for bringing the water supply into a building and removing liquid and water borne wastes from a building. This license will also allow you to install and connect gas piping.

Holding Environmental Protection Agency (EPA) Section 608 certification is a federal requirement that applies to all HVAC technicians who work with certain ozone-depleting refrigerant in any capacity. Delaware automatically requires this certification if you are applying for any of the following licenses:

There are three EPA certification options, depending on what types of work you’ll be doing:

To earn one of these certifications you must pass the EPA exam specific to the certification type. Your school, employer, or the state board can point you towards the nearest Section 608 exam site in Delaware, and you can potentially take a class, take your test, and earn your certification in the same day.

The State of the HVACR Industry in Delaware

There is a reason why in 2015 Delaware had the highest concentration of HVACR jobs of all states in the nation (U.S. Department of Labor). It has to do with a perfect storm of factors that include climate, energy cost, growth, environmental awareness, and government-sponsored incentives that push the installation of the most energy efficient HVACR systems.

As reported in the news journal delawareonline, Delaware led New England and the entire Northeast in population growth between 2010 and 2014 – higher than New York, Massachusetts, Virginia, and Maryland. This means residential construction is booming, and indirectly implies that so are the commercial and industrial markets.

Combine this reliance with the second-highest cost of residential electricity in the South Atlantic (US Energy Information Agency, 2016), an environmentally-conscious population, and government policies that fund HVACR efficiency upgrades and you will start to understand why Delaware’s Office of Occupational and Labor Market Information projects the number of HVACR jobs statewide will jump by 17.9 percent in the decade leading up to 2024.

An example of one such government policy is the Delaware Division of Energy and Climate’s Energy Efficiency Investment Fund. This is a funding pool that does things like underwrite HVACR upgrades for businesses and industry. By funding these upgrades, this program gets a return of approximately $2.40 to the state’s economy for every dollar it invests, while at the same time providing a government stimulus for the HVACR industry.

The Delaware Department of Labor shows job growth projections for HVAC technicians are also very attractive. Between 2014 and 2024 it estimates the number of these jobs will increase by 17.9 percent, with an average of 70 openings every year. That is significantly higher than the national projected growth of HVAC technician jobs during the same period, 13.6 percent.

Delaware residents don’t like to see energy wasted with inefficient HVAC systems, or to spend money on energy that goes out the window. Delaware residents in particular feel the pinch in their pocketbooks. The US Energy Information Administration reported that in 2016 Delaware had the highest residential and industrial electricity rates of all states in the South Atlantic region, and the second-highest commercial sector rate.

One such program is the state’s Energy Efficiency Investment Fund. This is essentially a grant that commercial and industrial entities can apply for. An application is available to anyone who pays the public utility tax and who purchases electricity or natural gas from a distributor who also pays that tax. Those who are awarded this grant receive funding to pay HVAC companies for heating system upgrades that improve efficiency.

The following salaries represent hourly and annual statistics. They are presented as a range between the median and the 90th percentile. Numbers are sourced from the US Department of Labor in May 2015:

Delaware’s Department of Labor also maintains statistics for HVAC technician salaries at the county level. The following information is from 2015 and represents average hourly and annual salaries: