Colorado has the second-highest projected job growth rate for HVAC technicians in the nation.The US Department of Labor

Colorado does not have a statewide licensing or credential requirement for HVAC technicians. If you work as an employee of an HVAC company you are not required by state or local regulations to hold any specific credentials.

However, all HVAC techs who work with common refrigerants throughout the state must meet specific federal Environmental Protection Agency (EPA) certification requirements.

Any company that hires HVAC techs sets its own standards for employment. These often include a preference, if not a requirement, for the following:

This can be particularly advantageous because it shows you have experience with advanced concepts and the concrete skills that employers are after, including:

College-based education programs also often include courses that will qualify you for EPA refrigerant certification.

Contractors in Colorado, companies that bid on projects, are also not licensed at the state level. However if you're aiming to become an HVAC contractor you will likely run into qualification requirements at the city or county levels of government. 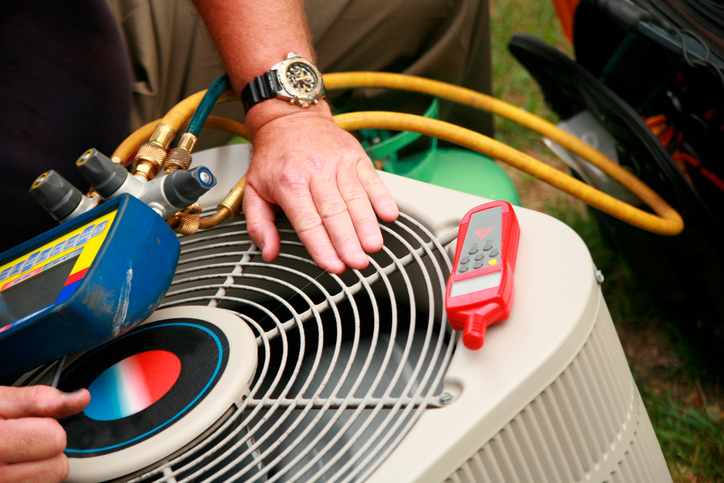 Service being done on an AC Unit

Having years of work experience or an industry credential are some of the most common employer-mandated requirements you'll encounter as an HVAC technician.

You can always gain experience by finding an employer who is willing to hire and train you as a greenhorn. However there are also more formal routes to gaining these valuable résumé boosters:

Industry-recognized credentials – These commonly include the following. Check around in your local area to see what employers commonly prefer:

If you work with pressurized refrigerant you need the federal EPA's Section 608 certification. There are four types of this certification that depend on what type of work you'll be doing:

To earn any of these certifications you must pass the EPA exam specific to the certification type. Same-day education and certification programs are common. Check with your local HVAC college program, with your employer, or with the EPA to find out when and where the next nearest training is.

There are no state-wide licensing requirements for HVAC contractors. You'll need to check with your local jurisdiction to see what, if any, requirements you must meet when operating your own contractor business.

Here are the largest jurisdictions that have specific HVAC contractor licensing requirements:

It would be an understatement to say Colorado's HVAC marketplace is robust.

In the decade leading up to 2022 Colorado is projected to have the second-highest growth rate of HVAC tech jobs in the nation, according to the Colorado Department of Labor and Employment and the US Department of Labor (USDOL). With a projected rate of increase at 43.5 percent, that amounts to an average of 340 HVAC job openings throughout the state each year.

The demand for HVAC technicians in Colorado stands on three important pillars:

Colorado has the second-highest projected job growth rate for HVAC technicians in the nation. In the decade leading up to 2024 the Colorado Department of Labor and Employment estimates these jobs will increase by 43.5 percent. That means an average of 340 HVAC technician job openings throughout the state every year.

Why such a high demand in Colorado? Unique factors combine to make perfect conditions in the state for HVAC technicians:

At the state level Colorado offers HVAC technicians the seventh-highest average salary in the nation. This comes out to an hourly median wage of $26.08, which is $54,250 annually. More experienced HVAC technicians – those in the top tenth percentile – earn $76,630 annually (US Department of Labor, 2015).

Demand and salaries are typically highest in the state's metro areas, however Colorado's non-metropolitan areas cannot be overlooked. In fact, of all rural areas in the nation HVAC technicians earn the third-highest average salary in northwest Colorado: $56,990 (US Department of Labor, 2015).

The following salaries are hourly and annual statistics. They are presented as a range between the median and the 90th percentile figures. These salary statistics are sourced from the US Department of Labor in May 2015: