A formal HVAC/R training program through a technical school, trade school, or community college resulting in a certificate of completion, career diploma or Associate of Applied Science (AAS) degree will provide you with the advanced knowledge and practical, hands-on training required to obtain entry-level employment as an HVAC/R technician in Arkansas. 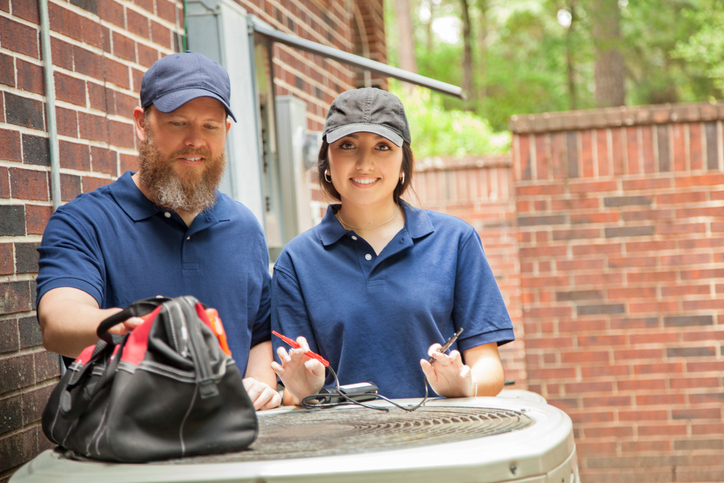 Many programs also include study in progressive areas of the HVAC/R industry, including energy efficiency and green installation techniques, and many include EPA Section 608 certification preparation and the exam itself as part of the curriculum.

Whether you choose to work as an HVAC/R technician, or take control of your career and start a business of your own as a licensed Arkansas HVAC/R contractor, the know-how and skills attained through an HVAC program will establish you as a reliable and trusted HVAC/R professional with knowledge and experience in HVAC and refrigeration systems.

You may also choose to gain experience through the completion of a formal apprenticeship. Arkansas Apprenticeship maintains a directory of current apprenticeships in Arkansas for the trades.

Federal EPA Certification Requirements – Many employers require their HVAC/R technicians to hold the Environmental Protection Agency’s (EPA) Section 608 Certification to meet federal requirements for the proper handling of controlled refrigerants commonly found in AC and refrigeration systems that are known to be environmentally hazardous. You will receive information on becoming EPA certified through your HVAC program or apprenticeship.

To earn EPA Section 608 certification, you must pass an examination that includes two sections:

Becoming an HVAC/R Contractor in Arkansas

In the decade leading up to 2024 the number of HVAC technician jobs is projected to grow by 16.5 percent. That comes out to an average of 80 new job opening each year throughout the state.The Arkansas Department of Workforce Services

To qualify for a contractor license, you must be at least 18 years of age and take and pass a Board-approved examination.

While it is customary to have at least two years of experience working as an employee of an HVACR contractor, you may substitute your HVACR-related technical training and educational for experience, provided it is approved by the Arkansas HVACR Board.

You must provide the Board with copies of your educational transcripts for consideration. The Board takes into consideration the program’s coursework and your grades when determining how many months or years of education you can substitute for experience.

You must complete an application for a state contractor’s license and provide the Board with proof of:

You must also provide the Board with:

You must file in one of five categories:

You must complete the Licensure Application for Arkansas HVAC, Sheetmetal, and Refrigeration Contractor and specify the class of license desired.

The licensure and registration fees vary, depending on the category of license for which you are applying:

You must also pass an HVAC/R examination to qualify for licensure. Once your application has been approved, the Board will send you a testing packet.

The HVAC/R contractor examinations are administered by Prov. You can learn more about examination requirements by visiting Prov. There are testing centers located in:

All HVAC/R contractor licenses expire one year from the date they were issued. You must submit your renewal form (provided by the Department) to the Department of Health before your expiration date.

Construction in Northwest Arkansas is going nowhere but up, much to the delight of Arkansas HVAC technicians and contractors. In fact, residential and commercial permit values tripled between January-June 2015 and January-June 2016.

New construction permits in Fayetteville, Rogers, Springdale, and Bentonville were valued at nearly $606 million during the first six months of 2016 – that’s 103 percent more than the $298 million in permits during the same period in 2015.

What’s even more impressive is that the commercial building sector was up 226 percent between January-June 2015 and January-June 2016. New commercial permits were valued at $391 million during the first six months of 2016 in Fayetteville, Rogers, Springdale, and Bentonville, compared to just $120 million a year prior.

Some of the largest commercial projects to receive permits in 2016 included:

Talk Business & Politics reports that many subcontractors, including electricians, painters, and HVAC specialists, are reporting solid business, thanks to plenty of new commercial projects and housing developments.

The Arkansas Department of Workforce Services reports that in the decade leading up to 2024 the number of HVAC technician jobs is projected to grow by 16.5 percent. That comes out to an average of 80 new job opening each year throughout the state. Compare this with the national projected HVAC job growth for that same period: 13.6 percent.

State government policy makers have been advocating and implementing policies that are beneficial to the HVAC industry because improved heating and cooling efficiency helps the state’s economy. As explained in a study produced by the Arkansas Advanced Energy Foundation (AAEF), “Both the initial investment and the re-spending of energy savings produce direct, indirect, and induced jobs.”

Prior to 2010 Arkansas encouraged energy efficiency through voluntary programs like Quick Start. 2010 marked the year when Arkansas adopted mandatory energy efficiency standards. During the 2010-2012 period the state’s largest electric utility and natural gas companies each doubled their savings because of regulations like minimum levels of HVAC efficiency. This savings is passed down by utility companies and also felt by private companies, who reinvest their expanded profits to create more jobs in a self-sustaining cycle.

In May of 2015 the US Department of Labor reported that HVAC technicians in Arkansas earned an average annual salary of $36,650. Statewide, those in the 90th percentile earned $55,750 which translates into $26.80 per hour.

The most populous cities are presented here with hourly and annual salary information. This is presented as a range between the median and the top 10th percentile. This salary data is from 2015 US Department of Labor records: