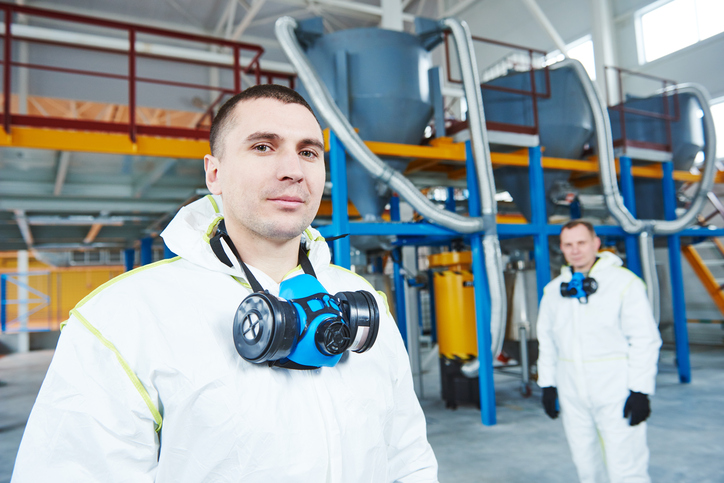 It was a hot July in Encino, California and an HVAC mechanic was just finishing up his last job of the day, charging up an office building’s HVAC unit with refrigerant. He called into his dispatcher to say he was nearly done and signed off for the evening. The next morning the building manager saw the HVAC tech’s ladder was still where he had left it the night before, and went to investigate.

You can guess what happens next, and unfortunately that’s a true story that’s repeated itself more than once.

The two most obvious hazards we face in HVAC are falls and electric shocks. However exposure to chemicals in the air and suffocation are often overlooked. These are very real and deadly dangers.

Inhalation risks come with the territory.

“V” is for the ventilation buildings and homes need to ensure good air quality and “R” for refrigeration means pressurized gaseous chemical refrigerants are part of the job. Odorless, colorless, noxious gas is a particularly sinister part of the job that can sneak up on you while you’re worrying about other, more obvious safety concerns.

Every year we lose guys in the field to toxic chemicals and asphyxiation. The number is pretty low in the big scheme of things, but even one avoidable fatality is one too many. The US Department of Labor reports that between 2010 and 2015, 38 HVAC techs lost their lives on the job due to exposure to harmful substances or environments.

You wouldn’t let your kid ride in the car without a seat belt. As an adult on the work site you shouldn’t consider your own safety any less important. You have a right to a safe working environment complete with ventilators, respirators, and proper monitoring equipment whenever necessary.

There are inherent dangers in working in tight spaces where it’s likely the normal ventilation systems are having problems or otherwise switched off. Add to that the fact that we work with a range of gases that are invisible and have no smell and that can seamlessly displace the oxygen in the air and suffocate us.

Understanding the risks, being properly trained, and erring on the side of caution helps make sure everyone gets to go home at the end of the workday.

We can illustrate a good example of air displacement with nitrogen. The air we breathe every day is made up of 78 percent nitrogen, 21 percent oxygen, and one percent argon.

When you need to pressure test an air conditioner’s condenser unit with nitrogen gas you might think there is no danger associated with this. After all, every breath we take is mostly nitrogen gas. But if you thought there was no danger you were wrong.

So you are in an enclosed space, you’ve got a pressurized tank of nitrogen, and you’re letting it into the lines of the AC. Here’s what can happen:

There could be a leak that’s venting nitrogen into the air you’re breathing. This could be from the AC unit itself, or from any point where you’ve got lines connecting with the nitrogen tank or AC unit.

As the nitrogen gas – colorless and odorless – escapes into the room the oxygen content of the air is going to become lower. Humans cannot survive long-term in an environment that contains less than seven percent oxygen (that’s the same amount of oxygen available at an altitude of 26,247 feet). Going from the normal 21 percent oxygen to seven percent oxygen doesn’t take long. The more the oxygen decreases below seven percent the higher your chance is of passing out. After just a few minutes with no oxygen you will sustain permanent brain damage.

About eight people die nationwide every year from nitrogen asphyxiation, and 10 percent of those are people trying to rescue their colleagues.The US Chemical Safety and Hazard Investigation Board

This example is with nitrogen, but you can replace nitrogen with any pressurized gas that displaces oxygen and you will face the same danger. Carbon monoxide is perhaps the most common gas that displaces air, and is a byproduct of burning natural gas.

The danger from these gases is a variation on air displacement. Instead of pressure displacing oxygen, heavier-than-air substances displace oxygen with density.

Air is the same way in the sense that when a denser gas is introduced, it sits on the bottom half of the room, while the air – including the oxygen we breathe – floats on top.

When walking into a basement to service a unit, you’ll be walking into an area where denser gasses would naturally tend to collect. If there’s been a refrigerant leak down there, virtually all the breathable air may have been pushed up and out and you might find yourself in an environment where you could very quickly run out of oxygen and pass out.

There are easy ways to mitigate this risk. All you need to do is take steps to increase air circulation like pumping air from the outside into the basement. This is akin to shaking up a bottle of salad dressing to mix the oil and water homogeneously. You could also enter a basement area with a self-contained breathing unit.

We can draw on a tragic example with the hopes of learning from past mistakes to illustrate the principle of heavier-than-air displacement asphyxiation.

In 2011 detailing the cases of five deaths caused by heavier-than-air refrigerant asphyxiation.The Institute of Refrigeration

Exposure to Poisonous and Noxious Gases

Aside from asphyxiation we also face challenges posed by straight up poison. This is especially true for those who work in industrial settings with systems that are meant to specifically ventilate noxious gases, but this topic is still relevant for all of us in the industry.

Toxic gases harm you by interfering with your body’s neurological or chemical processes rather than interfering directly with your oxygen uptake. A common example is chlorine gas, a chemical weapon and also a byproduct of mixing cleaning products that contain ammonia and bleach. A less-common example – but very relevant for anyone working in HVAC – is phosgene gas.

Responsible for upwards of 85 percent of all deaths caused by chemical warfare in World War One, phosgene gas also happens to be a byproduct generated when brazing certain metals, and can also become present when testing for leaks using an antiquated method on refrigeration systems that run chloromethanes, R12 and R22.

The residents of the small Pennsylvania borough Three Springs learned this the hard way when an HVAC technician was dispatched to repair a leaking AC unit and ended up in the hospital. It happened at a housing complex and lead to the evacuation of 29 people when the HVAC repairman inadvertently produced phosgene gas as he tried to make repairs. Luckily he realized something bad was happening and sounded the alarm before emergency services took him away. In this case everything turned out okay.

It’s not so common nowadays, but ask any old timer and they’ll tell you this trick for testing units that run R12 and R22. What you do is hook up a sniffer tube to a small torch with a copper element in the flame. Bring the sniffer tube near any place you suspect a refrigerant leak, such as a pipe joint or AC unit, and if there is leaking refrigerant it will get sucked up into the sniffer tube and blown out through the flame. If the flame turns a bright blue or greenish-blue then you’ve got yourself a leak.

The trouble is that once your flame turns blue it also means you’re producing phosgene gas. So if you’re doing this procedure it’s got to be in a well-ventilated space – or better yet, test for refrigerant leaks another way. However even if you’re just brazing in lines to an AC system with this type of refrigerant you’ll unavoidably create small quantities of phosgene.

In the case of this housing complex, the HVAC tech didn’t realize the byproduct of his test was a poisonous gas. It was only after burning a blue flame for a while – and subsequently sending the phosgene gas through the entire residential ventilation system, not to mention exposing himself to a fair amount – that he started to feel sick and realized something was amiss.

Aside from poisonous byproducts like phosgene, sometimes you might just be confused and get exposed to toxic gases accidentally. That’s what happened in July, 2011 in the city of Industry, California just outside LA.

An HVAC technician was working on a Genie lift and was supposed to cut an empty pipe that was in the way of a unit he was installing. He made a mistake and cut a pipe that was filled with peracetic acid, which subsequently sprayed the acid everywhere, effectively turning it into an aerosol.

To avoid serious contamination, the HVAC tech jumped off the Genie lift and his coworkers immediately got him outside to fresh air. They called the paramedics and thanks to everyone’s quick thinking the guy was out of the hospital in seven days and recovered. The moral of the story is that you should always be aware of any potential dangers in your vicinity – especially the ones you wouldn’t expect to be there.

The good news is that you can avoid most kinds of inhalation accidents by following the proper safety procedures and understanding the risks in your work environment. You should always have the appropriate tools for the job, which can include carbon monoxide detectors, gauges that measure oxygen content, and even self-contained breathing apparatuses for the most challenging and enclosed work spaces.

And whatever you do, don’t let your lead get away with trying to talk you into working in an unsafe situation. It just takes a second to get permanent lung or eye damage, and you can get permanent brain damage in a matter of minutes. No job is worth that, and any supervisor worth working under wouldn’t expect you to work in an unsafe environment under any circumstances.